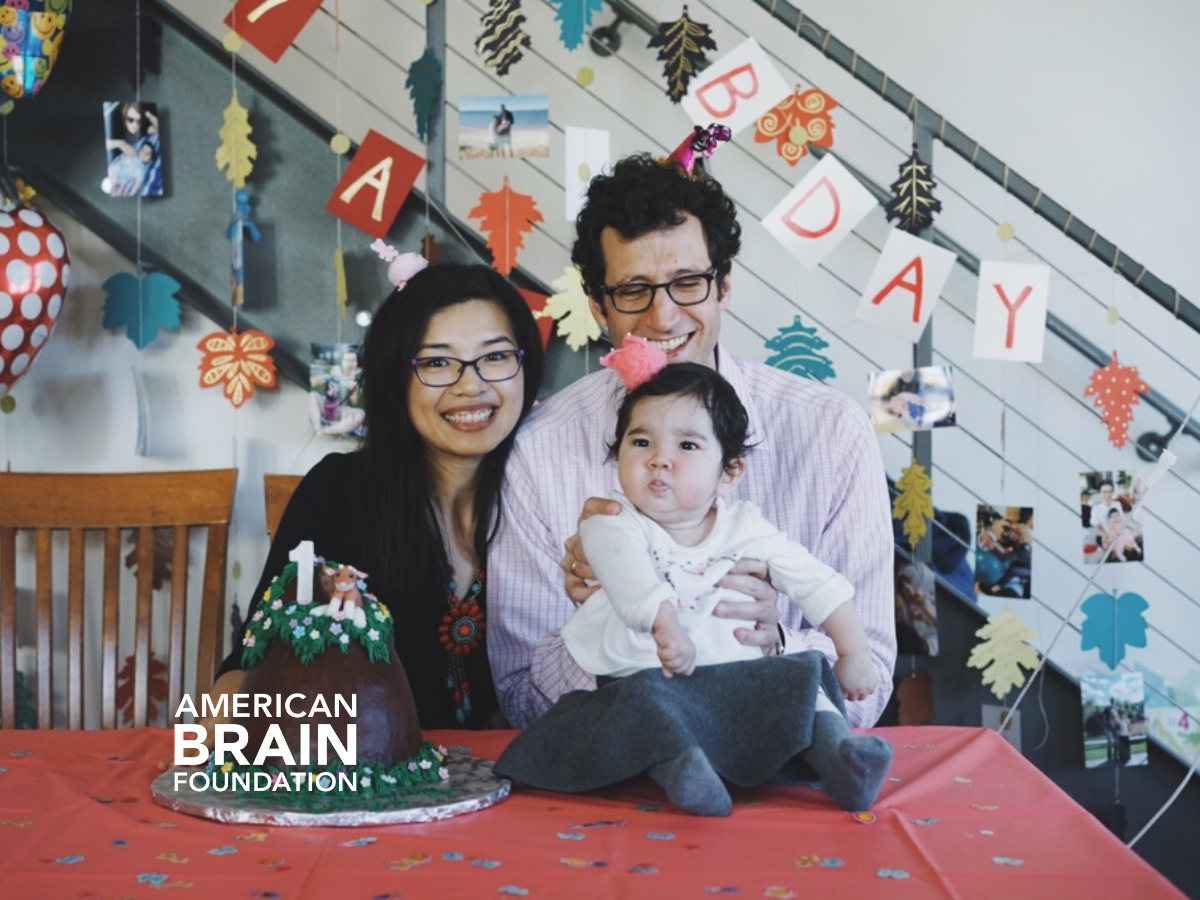 Following their own search for information about 4H leukodystrophy and devastation over the lack of available treatments, two determined parents honor their daughter’s memory and start a foundation

When new parents June and Ron first brought their daughter Yael home from the hospital, they were excited, bleary-eyed, and wrapped up in newborn bliss. But only a few short weeks later, they became concerned about their daughter, who they lovingly called Yaya. Her physical development didn’t seem to align with the newborn milestones they learned about.

This began a months-long journey to a diagnosis for a rare genetic neurological disease without a cure. Find out how they advocated for their daughter in pursuit of diagnosis and care. In addition, learn how they now fight for other patients like her and families like theirs.

At the time of the test, Yaya’s brain MRI read as normal. Plus, she still received a normal reading on a second scan six months later. Because doctors were not familiar with her rare disease, they couldn’t recognize the abnormalities. So they couldn’t land on a diagnosis that would explain the symptoms she experienced. By then, Yaya had failed a swallow study and needed a feeding tube. It took seven months, a hospitalization, and a surgery for Yaya to receive whole-exome sequencing. A month later, at eight months old, Yaya finally received a diagnosis: hypomyelination with hypogonadotropic hypogonadism and hypodontia. The common name for this is 4H leukodystrophy, or Polr3-related leukodystrophy.

But even with a diagnosis, June and Ron had as many questions as they had answers. “It was hard for doctors to tell us what they meant, frankly,” says Ron. “We had a terrific care team. [But] our geneticists had never heard of 4H or POLR3.” When Yaya’s parents tried to search for more information about 4H leukodystrophy online, they couldn’t find any large organizations that provided resources, connected families, or supported research to better understand the disorder and develop treatments. They felt confused and alone.

A Family’s Journey With a Rare Brain Disease

Yaya’s geneticists passed along three medical journal articles on 4H. This left Ron and June trying to make sense of their daughter’s diagnosis and prognosis through medical literature. “What they told us was: There’s nothing we can do. There’s no medicine. There’s no therapy or treatment,” says Ron. “I don’t think either of us knew that that sort of case existed—that you get diagnosed with a disease, and then you just do nothing and you don’t know what’s going to happen. You wait for it to progress and just try to manage symptoms.”

Their geneticists were reputable and experienced. But Ron and June walked away from their initial meetings without an understanding of what Yaya’s care would look like. Nor did they know what type of care team needed to form. The conversations focused on symptoms to watch for years down the line and the need for an MRI each year. But June and Ron needed to know about symptom management and comfort care. “We increasingly found ourselves to be in a position where we had to educate the doctors in order to get the care that’s needed,” says June. Yaya was having difficulty swallowing, which was causing respiratory issues. Time felt precious and her needs were immediate.

One of the couple’s best friends, an ER doctor, managed to connect June and Ron with a doctor in Montreal. She was one of the few clinician-researchers studying this rare disease.

“One thing that she told us was there’s no norm of how this disease would progress,” says June. “You take 200 patients. They all have something different. But throughout that journey, there was no playbook that we could follow as parents of a young child with a rare disease.” Thankfully, June and Ron found they could lean on this doctor as a resource and advocate for Yaya.

Her support was important as Yaya’s disease progressed. Yaya’s presentation of the disease was aggressive, with symptoms beginning at a very young age and rapidly progressing from there. After a life of love and joy, Ron and June’s daughter passed away shortly after her first birthday.

Following Yaya’s passing, her parents became determined to advocate for others with 4H leukodystrophy. To start, Ron and June reached out to a couple of other families touched by 4H. They also found some labs willing to submit research proposals to study the disease. But they quickly learned that it was necessary to first bring everyone together and share knowledge. In addition, it was important to create a community of collaboration centered on a common goal.

In 2018, they established the Yaya Foundation for 4H Leukodystrophy, an organization dedicated to supporting families and unlocking the mysteries of this rare disease through research. “We founded the only organization in the world that’s fighting for 4H leukodystrophy patients and families,” says Ron. In the process of obtaining seed funding and building a staff, the Yaya Foundation began to grow.

Lawyers by occupation, Ron and June run the Yaya Foundation as two parents dedicated to creating a community. They also help other families who face a similar situation to theirs. They work to provide educational and emotional support. These include resources for those with a loved one newly diagnosed with the disease. They do this because they don’t want others to feel as lost as they once did. “We’re really trying to find a way to build a community—a research community, care community, and a patient community to help our disease area,” says June.

June and Ron found other families like theirs through 4H-specific Facebook groups for parent-caregivers. They saw the incredible value in asking questions and getting answers from other people walking the same journey. Plus, they wanted to find a way to organize and share that information. Today, they host regular Zoom sessions attended by patients and families all over the world. During these calls, families connect with each other and, sometimes, disease experts. It is their hope that the Yaya Foundation offers parents support and reassurance that their child can have a wonderful life; that their family can build special memories together in spite of the disease; provides access to the specialized care that people affected by 4H need; and changes the world so that one day there will be transformational therapies available to people affected by 4H.

The Importance of Rare Disease Research

The other primary mission of the Yaya Foundation is to accelerate research and discover effective therapies for this rare disease. In bringing together a network of doctors, researchers, and other experts, even those outside the direct 4H community, Ron and June hope to create a knowledge base and push research forward.

Research specific to 4H is just beginning. But discoveries made for rare genetic diseases have the potential to advance therapies for other diseases as well. “You never know where that next great scientific discovery that is going to change the world could come from, and it could come from rare disease research and neurological disease research,” says Ron. For example, the success of gene therapy as a treatment for certain neurologic disorders is already helping determine current and future research for other similar diseases. Understandings gained from the study of one brain disease can unlock new paths to go down. In turn, they will lead to improved treatments, prevention, and cures for others.

“[It’s] just by some genetic twist that we each carry genetic differences that would lead to an autosomal recessive disorder. This could happen to anyone,” he says. “And so I think, one: Many of us are affected. Two: Any of us could be affected… Those who are fortunate to have not had their lives touched by rare disease or neurological disease are very fortunate to enjoy that luxury and have, I think, some obligation to support others who are not so fortunate.”

Especially in the area of rare diseases, there’s so much work to do. There is so much we still don’t know about the brain. But by studying all brain diseases and the connections between them, researchers are able to unlock insights that are wide-reaching and carry implications for multiple diseases—bringing us closer to cures.

The American Brain Foundation is committed to finding cures for all brain diseases and disorders that affect 1 in 6 people. Our whole-brain approach recognizes the interconnectedness of brain diseases and supports innovation through research by the best and brightest in the field of neurology. We know that when we cure one brain disease, whether prominent or rare, we will cure many. Donate today to make a difference. With your help, we won’t have to imagine a world without brain disease, we’ll be able to live in one.