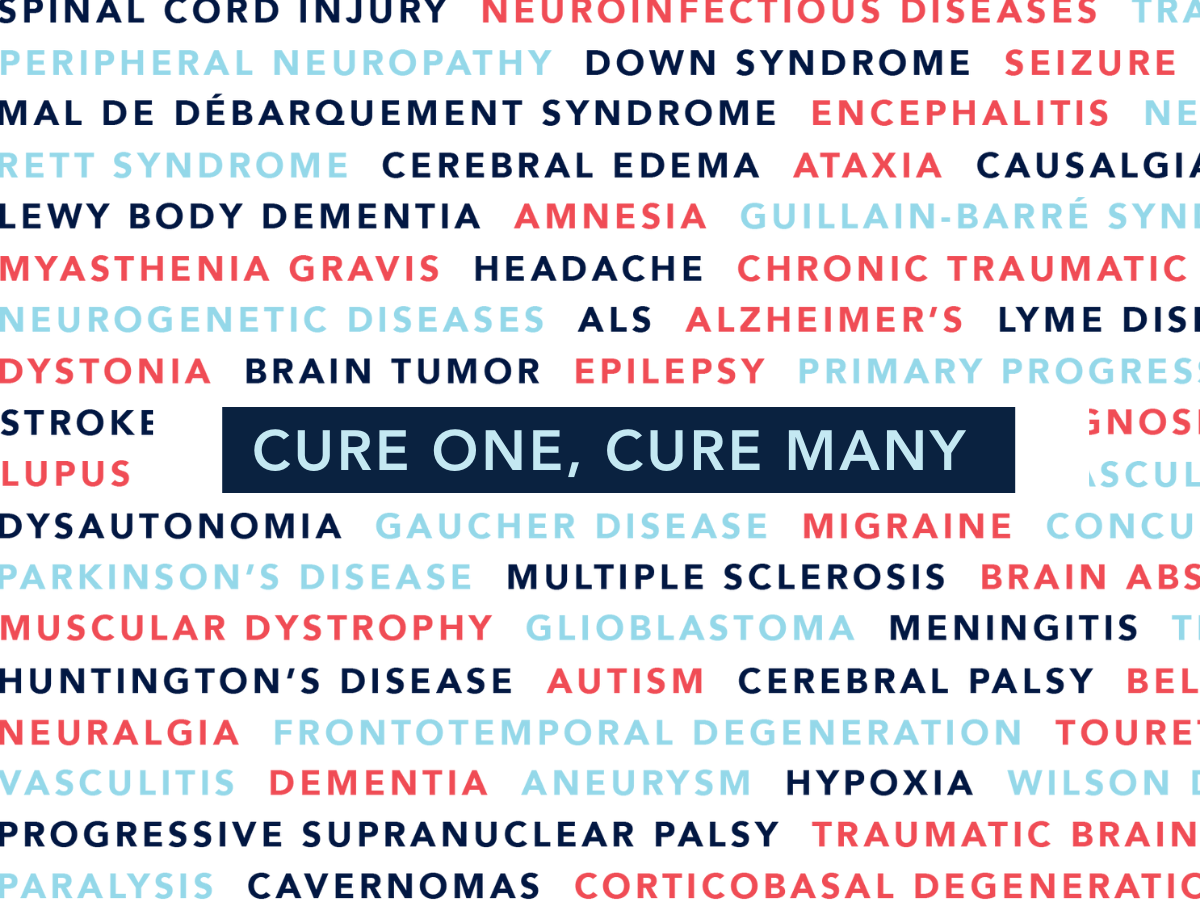 For almost 30 years, the American Brain Foundation has invested in research across all brain diseases in pursuit of improved treatments, preventions, and cures. The brain is the most complex organ in the human body. It consists of distinct but connected parts, each with its own unique function. And just like the parts of the brain, the diseases that affect it are interconnected as well.

As Orly Avitzur, MD, MBA, FAAN, member of the American Brain Foundation board and President of the American Academy of Neurology, puts it, “The brain is a wondrous organ. It controls our language, our speech, our vision, our movement, our sensation, our coordination, and much, much more. It also houses our imagination and creativity, our thoughts, our dreams, and our hopes. And yet, it is susceptible to more than 600 brain diseases or disorders. The ABF motto, ‘Cure one, cure many,’ underscores its hope and my hope as well that one discovery will lead to more, and one treatment will be applicable or modified to treat multiple linked brain diseases.”

The Foundation funds research to actively study the connections across multiple brain diseases to unlock breakthroughs. Cure One, Cure Many highlights the understanding a cure for one brain disease will provide a better understanding of others. Ultimately, this will lead to more cures.

“We’ve learned that funding research across disease categories rather than for single diseases can lead to greater innovation and advances in treatment,” says David Dodick, MD, FAAN, Professor of Neurology at Mayo Clinic Arizona and Chair of the American Brain Foundation. Researchers in the field of neurology have found connections between many different brain diseases—and these understandings have already led to cures.

Here are some real-life examples of Cure One, Cure Many in action.

Connections Between Migraine and Epilepsy

While there are important differences between migraine and epilepsy, research has found connections between the two brain diseases. If a person has epilepsy, they are more than twice as likely to experience migraine compared with someone who doesn’t. People with migraine are more than twice as likely to have epilepsy compared to someone who doesn’t have migraine. Additionally, some medications used to treat epilepsy also work to prevent migraine attacks.

Both migraine attacks and epileptic seizures may be caused by abnormal electrical activity in the brain and can be preceded by auras. However, people with migraine who develop epilepsy typically have another risk factor, such as a head injury or stroke.

“The areas in neurology that I focused on during my career were migraine, stroke, and traumatic brain injury or concussion and each of those have been associated with white matter injury. And so it’s a perfect example of where three completely different diseases have perhaps an underlying shared biology,” says Dr. Dodick.

These connections mean a discovery in migraine could lead to improved treatments and preventions for epilepsy, and vice versa.

The Effects of Nervous System Inflammation Across Diseases

Inflammation is the body’s natural response to injury or illness. Neuroinflammation happens when an illness, injury, or other issue causes inflammation within the nervous system. Inflammation in the brain and spinal cord occur with many brain diseases and disorders, particularly autoimmune and degenerative ones.

High levels of neuroinflammation may accelerate brain aging and contribute to the progression of certain brain diseases. For example, it may be a major component of the symptoms and progression of Parkinson’s disease. And multiple sclerosis (MS) is also characterized by an inflammatory process along with the loss of the structure and function of neurons, known as neurodegeneration. Finally, research on brains affected by Alzheimer’s disease has shown that an increase in inflammation can also contribute to neurodegeneration.

Inflammation can also play a positive role in brain health. Whether neuroinflammation is beneficial or not depends on context, intensity, and duration. For example, if the brain experiences tragedy or trauma, an inflammatory response helps drive repair processes. It helps promote immune conditioning and neuroplasticity, which is the brain’s ability to alter connections, after an injury. But if the inflammation goes on for too long, it can cause damage.

Understanding neuroinflammation better can help researchers and doctors know where, when, and how to increase or decrease inflammation within the central nervous system. Being able to regulate inflammation in this way could lead to improved treatments for many different brain diseases.

Commonalities in Neurodegeneration Causes and Effects

Emerging research is uncovering the causes of these diseases, including abnormal protein deposits and brain metabolism, brain cell death, and inflammation. “This new science is showing that not only are some of these mechanisms common to multiple brain diseases associated with aging but that they are also present in other disorders earlier in the lifespan,” says Frances Jensen, MD, FACP, FAAN, who is on the American Brain Foundation’s board of directors.

Neurodegenerative diseases like Alzheimer’s, Parkinson’s, and Lewy body dementia (LBD) share similarities and overlapping symptoms. So it can be difficult to accurately diagnose them. Accurate diagnostic tests for these diseases are essential to developing treatments. They can also help uncover a diagnostic test for one of them may help researchers better understand and treat others.

The search for a biomarker for LBD is also the priority area behind the American Brain Foundation’s 2022 Cure One, Cure Many Award. In partnership with the Alzheimer’s Association, The Michael J. Fox Foundation for Parkinson’s Research, and the American Academy of Neurology, the award seeks to attract the best minds in brain disease research to find a way to definitively diagnose LBD.

The similarities across these neurodegenerative diseases mean breakthroughs in one area can help diagnose, treat, and prevent others.

The Ripple Effect of Gene Therapy

Neurogenetic diseases are caused by a defect in one or more genes that affect the nervous system. These diseases include spinal muscular atrophy, early-onset muscle disorders, muscular dystrophies (such as Duchenne and LGMD), and others.

But now, some of these diseases have hope for a cure because of a research breakthrough in gene therapy. The work of 2019 Cure One, Cure Many Award recipient Jerry Mendell, MD highlighted this approach. Dr. Mendell’s research uncovered a one-time gene therapy treatment for type 1 spinal muscular atrophy—an otherwise fatal disease.

As the first gene therapy treatment approved for treating a neurogenetic disease, this discovery has paved the way for similar therapies for Duchenne and other types of muscular dystrophy. 2021 Next Generation Research Grant recipient Renatta Knox, MD, PhD, is building on this research to apply gene therapy to other nervous system diseases as well.

“I’m at a center which is actually harnessing the power of gene therapy, not just to treat one disease like spinal muscular atrophy but to treat many. I am working every day with scientists, clinicians, and families to be developing, translating this gene therapy approach again to diseases that affect the nervous system and other parts of the body,” says Dr. Knox.

This application to new disease areas underscores our core belief that if we cure one disease, we will cure many.

The American Brain Foundation aims to maintain strong connections between different neuroscience research domains. After all, sharing knowledge can accelerate research projects beyond their original focus. “If your pathway or your drug might work something out with somewhere else, it’s important to find these collaborators to bridge those gaps across diseases or across different kinds of clinical areas,” says Alexander Gill, MD, PhD, a 2021 Next Generation Research Grant recipient studying MS.

Other Next Generation Research Grant recipients have grown their areas of study due to advances in neuroscience and medicine. Dr. Knox, for example, is studying gene therapy in neuromuscular disease. But some of the theory behind her project comes from another field entirely: cancer research.

“The molecules that we’re very excited to apply to the muscle disease that I study have actually been studied the most in cancer, and so we have this opportunity to do the literature and collaborations by actually being able to take advantage of some of the wealth of knowledge that’s coming from other fields as well,” says Dr. Knox.

We know that collaboration fosters innovation and helps researchers build bridges between different brain diseases. They can apply that knowledge across their area of focus. Then they can extend those learnings into new areas of brain disease research. These learnings are cumulative and their effects can be wide-reaching.

“Once you’ve developed a successful treatment, you can then adapt the technique to a related disorder that may be caused by a different gene or different abnormal protein,” says Wendy Yau, MD, 2021 Next Generation Research Grant recipient whose research in cognitive aging seeks to discover the connections between early vascular risk and white matter injury. “I think this is the beauty with research in science, is that knowledge is cumulative and collaborative, so I think this Cure One, Cure Many approach really takes advantage of that and will maximize the potential to advance the field of brain science.”

Continued investment in research is needed to continue to study the brain. One day, they’ll uncover the connections that lead to cures for the 1 in 6 people diagnosed with brain disease.