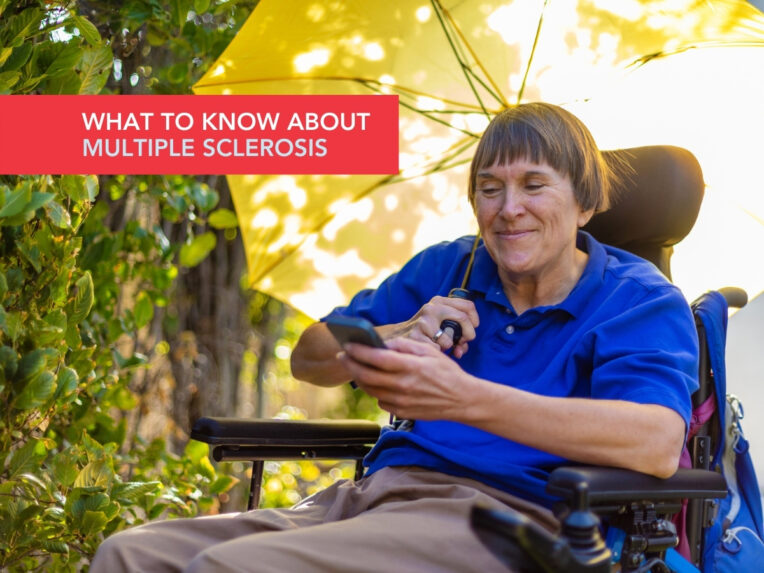 Learn about the symptoms, diagnosis, treatment, and current research efforts of this brain disease

Multiple sclerosis (MS) is an unpredictable disease that affects more than 1 million people in the United States. The disease interrupts the communication between the brain and the body and causes muscle weakness, fatigue and balance problems. It often causes distinct attacks, where symptoms get worse and then subside. This adds to the unpredictability for those living with this brain disease.

Here’s what you need to know about MS.

What Is Multiple Sclerosis?

Multiple sclerosis is a chronic disease of the central nervous system, which includes the brain, spinal cord, and optic nerves. It can cause unpredictable attacks. Doctors call it an autoimmune disease, in which the body’s immune system attacks its own tissues.

In the case of MS, the immune system causes inflammation that attacks myelin, the protective coating that surrounds nerve cells, and can cause damage to the nerve itself. This disrupts the communication between the brain and other parts of the body.

About 1 million people in the U.S. over the age of 18 live with multiple sclerosis, and 10,000 new cases are diagnosed every year.

The cause of MS is unknown, but it’s possible abnormalities in the immune system as well as environmental and genetic factors could contribute to the risk of developing the disease. Two to three times more women have MS than men, suggesting hormones may play a part in risk. MS is not an inherited disease. But studies of families and identical twins show patients may inherit some genetic risk.

More cases occur in areas farther from the equator, which points to potential environmental factors, such as vitamin D levels. Smoking and obesity may also increase the risk of developing MS.

Symptoms of multiple sclerosis can range from mild to disabling. They usually begin between age 20 and 40 with blurred or double vision. Many people with this disease also experience muscle weakness in their limbs, tingling or numbness, fatigue, and difficulty with coordination and balance, all of which can cause issues with walking and standing.

As the disease progresses, people with MS may develop muscle stiffness, dizziness, pain, speech problems, cognitive impairments, and urinary problems. Less common symptoms include tremors, blindness, and paralysis. Two-thirds of people continue to be able to walk, though they may need help from a device such as a cane for stability or a wheelchair due to fatigue or balance issues.

Diagnosis is typically determined by magnetic resonance imaging (MRI), lumbar puncture (spinal tap) and/or electrical tests. Doctors look for damage in at least two different areas of the central nervous system that happen at different times. They will also typically do blood tests to rule out other diseases.

There is no cure for MS, but there are many treatment options to prevent relapses and further damage to the central nervous system. These treatments include as many as 16 drugs approved by the Food and Drug Administration.

There are also therapies for treating relapses, including corticosteroids, which reduce nerve inflammation, and plasma exchange, which involves removing the liquid part of the blood, mixing it with a protein and putting it back. Plasma exchange is best for those with new, severe symptoms that don’t respond to steroids.

Multiple sclerosis can also be managed with lifestyle changes and symptom management to improve quality of life. New research on diet, exercise and general wellness have shown benefits for people with MS.

There is much that is still unknown about multiple sclerosis. Research can help us better understand what causes the disease, how to prevent relapses, and how to develop new treatment options to not only stop nerve damage but also repair it.

The American Brain Foundation supports a number of promising research efforts. Dr. Farinaz Safavi is currently researching an enzyme that shows promise in reducing inflammation in the brains of people with MS. Dr. Omar Al-Louzi is using new imaging techniques to learn more about the “central vein sign” (CVS), a blood vessel that is more frequently present in lesions in people with MS than other diseases, which may help with diagnosis and monitoring of MS lesions. And Dr. Ulrike Kaunzner is exploring if the presence of chronic active lesions, which have more inflammation than inactive lesions and are associated with more severe MS, and whether they can predict the disease’s progression.

The American Brain Foundation was founded to bring researchers and donors together in the fight against brain disease. Learn more about multiple sclerosis and other brain diseases or make a gift to support groundbreaking brain disease research.