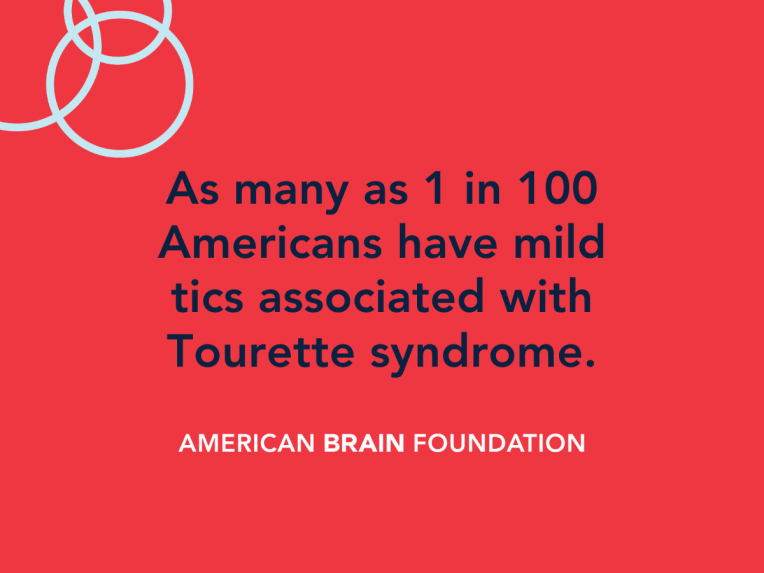 Learn why Tourette syndrome is a brain disease, what types of tics there are, and how we treat it

Tourette syndrome is a neurological disease characterized by involuntary, repetitive movements and vocalizations called tics. While many consider it a movement disorder, it is also a brain disease. Its cause is unknown, but current research suggests tics may happen when there are problems with how messages travel through the brain―such as abnormalities in certain areas of the brain or in communication between nerve cells.

About 200,000 Americans have the most severe form of Tourette syndrome, but about 1 in 100 people in the U.S. have milder symptoms.

Tourette syndrome is an inherited disease, but the pattern of inheritance is complex. A genetic predisposition can result in varying degrees of severity or different forms of expression. The disease is three to four times more common in males than females, and it occurs across all ethnic groups.

The first symptoms of Tourette syndrome usually occur during childhood with an average onset of between 3 and 9 years old. The main symptom is tics—repetitive, involuntary movements or vocalizations. Tics are classified as simple (movements involving a limited number of muscle groups) or complex (patterns of movement involving multiple muscle groups).

Common simple motor tics include head jerking, shoulder shrugging, eye blinking, and facial grimacing. Complex motor tics are a combination of these types of movements. Simple vocal tics include repetitive throat-clearing, grunting, or sniffing, while complex vocal tics involve words or phrases. The most disabling tics involve self-harm such as punching oneself, calling out inappropriate words or swearing, and repeating others’ words. Tics can vary in frequency and severity, and may be heightened with excitement, anxiety, and certain physical or environmental triggers.

Many people with Tourette syndrome also have neurobehavioral problems like hyperactivity, inattention, impulsivity, and obsessive-compulsive thoughts and behavior.

Tourette syndrome can be a chronic disease. However, symptoms are typically the worst during the early teenage years and show improvement in the late teens and adulthood. For some with Tourette syndrome, symptoms will mostly go away in adulthood and no longer require treatment. But for approximately 10%-15% of people with the disease, it lasts into adulthood.

Initially, tics are often misdiagnosed or attributed to a developmental phase or another condition. Doctors typically give the diagnosis of Tourette syndrome after both motor and vocal tics have been present for at least one year. Diagnosis is based on medical history and a physical and neurological exam. There is no blood or laboratory test for this disease, though doctors sometimes use imaging to rule out other conditions.

Neuroleptics are the most common type of medication used for tic suppression. But its effectiveness varies and depends on each specific individual.

For example, Alonso Zea Vera, MD, is using EEG to study brain responses in children with the goal of identifying a biomarker for Tourette syndrome and tic severity. His research receives funding from the American Brain Foundation and the Tourette Association of America, in collaboration with the American Academy of Neurology.

The American Brain Foundation was founded to bring researchers and donors together in the fight against brain disease. Learn more about Tourette syndrome and other brain diseases or support groundbreaking research by giving today.