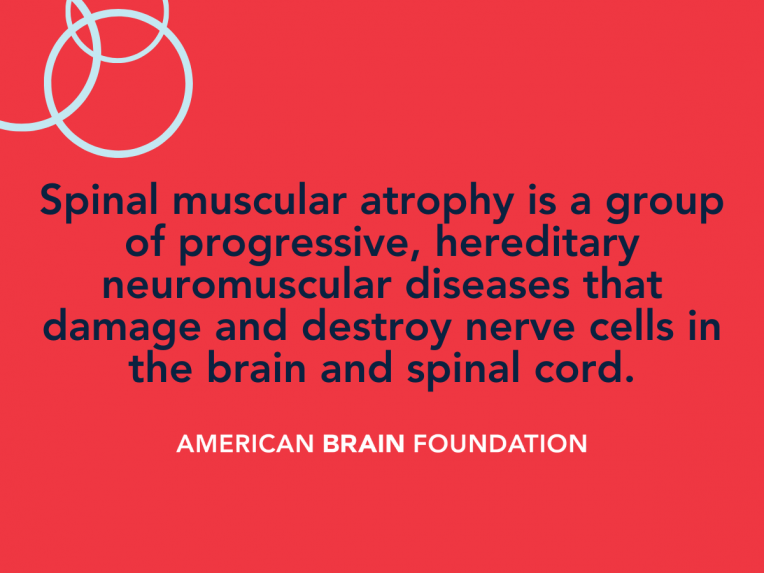 Spinal muscular atrophy (SMA) is a group of hereditary neuromuscular diseases that damage and destroy nerve cells in the brain and spinal cord. This damage affects a person’s ability to move their arms, legs, face, chest, and throat and impacts their skeletal muscle activity related to speaking, walking, breathing, and swallowing. SMA is a progressive disease and, over time, the muscles weaken, develop twitching and atrophy, or decrease in mass due to immobility.

Spinal muscular atrophy affects between 10,000 and 25,000 children and adults in the U.S. and approximately one in every 50 people is a carrier of the disease. SMA is a hereditary disease, and except in rare cases, is inherited when a person receives one mutated gene from each parent.

The most common form of this disease is caused by an abnormal or missing gene. This gene, called survival motor neuron gene 1 (SMN1), produces a protein essential to the health and function of motor neurons. These connect the spinal cord with the nervous system and transmit impulses controlling muscle movement. Less common forms of SMA are caused by defects in other genes.

What Are the Signs and Symptoms of Spinal Muscular Atrophy?

The signs and symptoms of spinal muscular atrophy vary but involve muscle weakness, decreased muscle tone, limited mobility, and in some cases, issues with breathing and swallowing. The most common form of SMA can be classified into four types. We distinguish these types based on the highest motor milestone achieved, the age of disease onset, and the severity of the individual’s symptoms.

Type I, also known as Werdnig-Hoffman disease or infantile-onset SMA, is typically apparent by six months of age. It can have symptoms like reduced movement or muscle tone, shortening of muscles and tendons, lack of tendon reflex, skeletal abnormalities, and issues with breathing, feeding, and swallowing. Without treatment, many children with this type of SMA have a life expectancy of two years of age. With proactive treatment and ongoing care, life expectancy can be longer and children may achieve some motor milestones like sitting and walking. Learn about a recent treatment for Type 1 SMA in our monthly Brain Health Roundup.

Type II, or Dubowitz disease, usually becomes evident between six and 18 months of age. Children with SMA Type II can sit but cannot stand or walk unassisted, and some also have respiratory problems. Older children typically have less severe symptoms and a better prognosis. While people have a shorter life expectancy, many individuals live to adolescence or young adulthood, and with continued care, some individuals live a normal lifespan.

Children with Type III, or Kugelberg-Welander disease, develop symptoms after 18 months of age. While they can walk independently, they often have difficulty with other motor movements like rising to stand from a chair, running, and climbing. They can also experience problems with spine curvature, shortening of the muscles and tendons, and respiratory issues. With proper treatment, life expectancy is typically in the normal range.

Type IV has an onset after 21 years of age. People with SMA Type IV primarily have mild to moderate leg muscle weakness and other symptoms.

How Is Spinal Muscular Atrophy Diagnosed?

To diagnose SMA, doctors typically conduct a blood test, which will indicate if the SMN1 gene is missing or abnormal. This test can also show if a person is a carrier of the defective gene. Ninety-five percent of SMA Types I, II, and III can be identified with a blood test. However, if the SMN1 gene does not appear to be abnormal, other tests including muscle biopsies and additional blood tests can help with diagnosis.

The disease is progressive, with symptoms becoming more severe and motor function decreasing over time. Treatment includes medications and therapies to manage symptoms and prevent complications. These may include oral medications for children two and older as well as gene therapy for infants. Without treatment and care, SMA symptoms will not improve.

Many people with this disease require care to manage their breathing, nutrition, movement, and daily activities. Physical and occupational therapy, including stretching and strengthening exercises, can help prevent joint immobility and muscle weakness. Some people with SMA also require therapy for speech and eating difficulties or special ventilation assistance if they have respiratory problems. Assistive devices like braces and wheelchairs can provide a sense of independence.

Research led by Jerry Mendell, MD, FAAN, the recipient of the 2019 American Brain Foundation’s Scientific Breakthrough Award, uncovered a one-time treatment for children with Type 1 Spinal Muscular Atrophy. This treatment, called Zolgensma, provides a cure for what is otherwise a fatal disease. Many neurologists consider Zolgensma to be the most spectacular advance in neurologic research. This breakthrough in gene therapy gives hope to all people with SMA and even muscular dystrophy.

Current SMA research is investigating what causes motor neurons to become damaged and deteriorate. Additional research projects are working to determine the specific biomarkers that indicate SMA. Research is also focused on SMA therapies, including developing medication and gene therapy to stop motor neuron degeneration and slow the disease progression.

The American Brain Foundation was founded to bring researchers and donors together in the fight against brain disease. Learn more about spinal muscular atrophy and other brain diseases or help us in our mission by giving today.