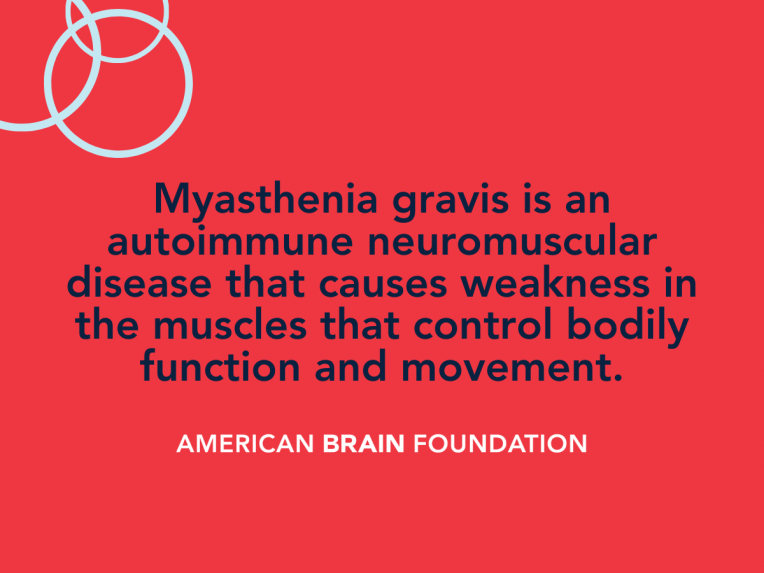 Learn about the symptoms, diagnostic tests, and treatment options for this autoimmune disease that causes muscle weakness

Myasthenia gravis is an autoimmune neuromuscular disease that causes weakness in the muscles that control bodily function and movement. Rather than protecting the body, the immune system of someone with this disease attacks its own cells and tissues.

For people with myasthenia gravis, antibodies—proteins produced by their immune system—block the normal activity of a neurotransmitter called acetylcholine. This causes an interruption in the messages sent from the nerve endings to the muscles and prevents them from contracting. The thymus gland can also play a role in this immune system response.

Here is some helpful information about myasthenia gravis.

Myasthenia gravis affects approximately 14 to 20 out of 100,000 people in the U.S., which translates to 36,000 to 60,000 individuals. It affects all genders and ethnic groups. Symptoms can begin at any age but most commonly develop in women under 40 and men over 60 years of age. A very small percentage of people with myasthenia gravis have a relative who also has the disease. But people do not inherit it, nor is it contagious.

Pregnant people with myasthenia gravis can be pass antibodies in utero and cause neonatal myasthenia. It’s a condition that causes temporary muscle weakness in the infant and usually resolves two to three months after birth.

The primary symptom of myasthenia gravis is muscle weakness that can vary in type and intensity. It often worsens after activity and improves with rest. In milder cases, myasthenia gravis affects the muscles of the eyes and face, commonly causing drooping eyelids, impaired vision, and changes in facial expression.

In more severe cases, the disease can affect the muscles in the limbs and the muscles that control breathing, chewing, swallowing, and speaking, leading to impaired speech, shortness of breath, and difficulty eating and drinking. Sometimes, severe muscle weakness can cause respiratory failure and require immediate medical care.

About 15 to 20 percent of people with myasthenia gravis will experience at least one myasthenic crisis—a medical emergency in which the muscles that control breathing become so weak that a person requires a ventilator to breathe. Anything from stress, infection, or surgery, to an adverse reaction to a medication can trigger a myasthenia crisis. With that said, up to 50% of myasthenic crises will not have a clear cause.

While symptom onset can be sudden, diagnosis is often delayed for years because symptoms of muscle weakness can appear similar to other illnesses or diseases like ALS. To diagnose myasthenia gravis, a physician will typically run a series of tests. Initially, a doctor will review a patient’s medical history and conduct a physical and neurological examination to check muscle tone and strength, eye movement, and coordination.

Another commonly used test to diagnose myasthenia gravis involves an injection that temporarily relieves muscle weakness in people with the disease. If the person has it, muscle strength will be temporarily increased.

Myasthenia gravis can also be diagnosed with the help of a blood test. Most people with the disease have high levels of specific antibodies found in the blood.

Other diagnostic tests include repetitive nerve stimulation to measure how muscle fibers respond to electrical stimulation, diagnostic imaging such as a CT scan or MRI to screen for tumors in the thymus gland, and pulmonary function testing to measure breathing strength and help predict the possibility of a myasthenic crisis.

What is the best treatment for myasthenia gravis?

While there is no cure for myasthenia gravis, treatment can significantly improve symptoms for many people. They can control the disease with medications and immunosuppressants. These medications help improve communication from neurotransmitters to the muscles as well as boost muscle strength. However, people taking these medications need to be carefully monitored for side effects. For some, the disease may temporarily go into remission and they may be able to pause medication for a time. It’s always recommended that individuals talk to their physicians about the best treatment options for their needs.

Surgery may also be a treatment option for some. Many people with myasthenia gravis have an abnormal thymus gland. This gland is important for immune function. It normally grows gradually until puberty when it becomes smaller and is replaced by fat. In people with myasthenia gravis, the thymus gland may remain large and contain clusters of immune cells or tumors. It may also give incorrect instructions to the immune system, causing it to attack itself and produce antibodies that interrupt neurotransmitters. The surgical removal of the thymus gland, called a thymectomy, can improve symptoms.

In severe cases, procedures like plasmapheresis, which removes abnormal antibodies in blood plasma, or intravenous immunoglobulin, which provides healthy antibodies from donated blood, can temporarily relieve symptoms for a few weeks or months.

New drugs for the treatment of myasthenia gravis are currently in testing to determine effectiveness, either on their own or in combination with common treatment medications. Other research efforts are working to better understand neuromuscular development, develop tools for diagnosis, and identify biomarkers that can predict a person’s response to immunosuppressive medications.

The American Brain Foundation was founded to bring researchers and donors together in the fight against brain disease. Learn more about myasthenia gravis and other brain diseases or help us in our mission by giving today.