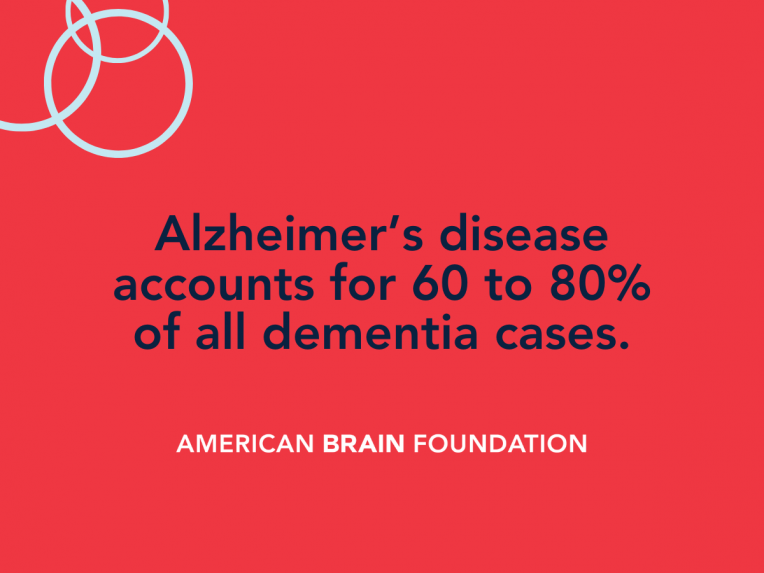 Learn about the risk factors, symptoms and treatment options for Alzheimer’s disease, the leading cause of dementia.

Alzheimer’s disease is an irreversible brain disease that affects memory, thinking, and the ability to complete daily tasks. Approximately 5 million people in the U.S. have Alzheimer’s disease. It is the most common cause of dementia and accounts for 60 to 80% of all dementia cases. There is currently no cure for Alzheimer’s, and the disease is typically fatal within 10 years of onset.

Age is the top risk factor, and the risk of developing Alzheimer’s doubles every five years after age 65. However, about 200,000 people under age 65 have early-onset Alzheimer’s.

Genetic, environmental, and lifestyle factors can play a role in causing dementia-related diseases like Alzheimer’s. The most significant factor in early-onset dementia is genetics. If a person has a parent or sibling with Alzheimer’s, that person has double the likelihood of developing it.

Cardiovascular conditions like high blood pressure, diabetes and high cholesterol may also be contributing factors to Alzheimer’s. In addition, secondary conditions such as stroke can be factors.

Symptoms of Alzheimer’s disease include memory loss beyond what is normal with aging, especially difficulty remembering new information or recent events, repeating questions, and forgetting important dates; problems with completing everyday tasks; misplacing items; and trouble concentrating, problem-solving, or making decisions. As the condition progresses, people can become confused, irritable, and suspicious. They will gradually lose their independence and require an increasing level for care over time. Ultimately, they become fully dependent on others.

While advances in Alzheimer’s research include testing to diagnose the condition at a very early stage, this technology for this is not accessible to most people.  However, doctors can make a diagnosis by gathering a detailed medical history from the patient or a family member, conducting a neurological exam, and evaluating memory, cognitive skills, and other functions. It’s also important to rule out other conditions that can present with similar symptoms.

Alzheimer’s disease causes a buildup of plaques and tangles from specific proteins (beta-amyloid and tau) in the brain, which causes brain cells to malfunction and eventually die. Diagnostic tests that measure the levels of these proteins in the blood or fluid surrounding the brain are under development and would create a more accurate way to diagnose the disease.

There is no cure for Alzheimer’s disease. Two types of drugs are commonly used to slow the progression of Alzheimer’s: cholinesterase inhibitors in the early to moderate stages of disease, and memantine for moderate to severe stages. Both of these drugs work by impacting the chemical messengers involved in memory and learning.

Other medications can be used to treat symptoms, such as depression and anxiety, and improve quality of life. Maintaining a healthy lifestyle, including good nutrition, exercise, sleep and socialization, can help manage Alzheimer’s disease.

Current research is looking at how the brain works and changes with age, how dementia affects the brain, how we can predict who will develop dementia, as well as prevention and treatment options.

The American Brain Foundation was founded to bring researchers and donors together in the fight against brain disease. Learn more about Alzheimer’s disease and other brain diseases or make a gift to support groundbreaking brain disease research.