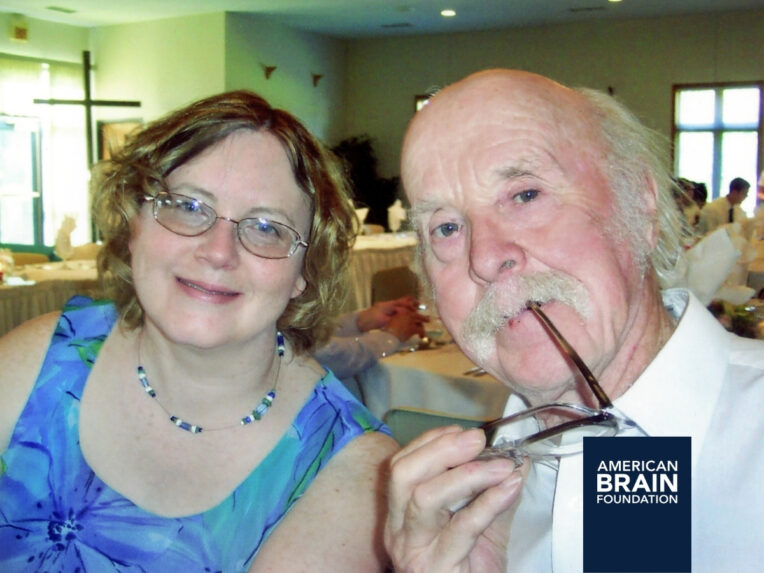 Nancy Poland remembers the day she shifted into a caregiver role for her father with brain disease, Lee. It was 2005. The two met for lunch at a sandwich bar near their respective offices in Minneapolis. Lee handed her his checkbook and said, “Take this. I can’t figure it out anymore.”

While Nancy and her sisters had noticed their father had become more forgetful, she was shocked to discover Lee was $8,000 in debt and his business was barely making any money. That lunch marked the beginning of Nancy’s journey as a brain disease caregiver—one of ups and downs and lessons learned.

Lee was a street-smart, outgoing businessman who loved to tell stories. So it was difficult for Nancy and her three sisters to watch their father’s decline without knowing the cause. Doctors only diagnosed Nancy’s father with Lewy body dementia (LBD) in 2012, shortly before he died. Unfortunately, LBD can only be definitively diagnosed with a brain autopsy after death, so Lee’s delayed diagnosis is common.

Several years earlier, in 2005, Lee had initially been diagnosed with vascular dementia. At the time, Nancy and her family felt relief it wasn’t Alzheimer’s. “We thought, ‘Well, we can live with this. He needs some help, but he can still function,’” Nancy says. “But then he got worse… We didn’t know what was in store for us.”

Nancy’s parents took care of each other until the end. “[My mother] had the mental faculties, but she had a lot of physical problems,” Nancy says. “She had really bad back trouble and she ended up with kidney cancer, so he took care of the physical things. He would get their toast ready in the morning, and she would do their pills and plan the little meals.”

The Role of Caregiver

Over the years, Nancy watched her father’s condition get worse. Although Lee’s memory seemed intact, his thinking and self-control was not. He couldn’t process information in the same way. Nancy stepped in to help organize her parents’ lives, taking on their financial affairs and legal paperwork, as well as house repairs and maintenance. She also drove her father to and from his office, bonding over coffee and stories of his childhood on the way.

Near the end of his life, when Lee wasn’t able to move his body, he still seemed to recognize his daughters. “They said he was a functional quadriplegic. It’s not that his limbs wouldn’t move, but that his brain wouldn’t connect with his limbs to tell him what to do,” Nancy says. “We were pretty sure he knew us, because he’d get tears in eyes when he saw us and he would react to us, but he could barely say even a word or two.” Seeing her father like this—such a contrast to the friendly, entrepreneurial storyteller she knew—was horrible.

During this time, Lee’s daughters each played a unique role in caregiving. Nancy acted as the administrative one, using her experience in government and nonprofit work to apply for medical assistance and complete paperwork. Her older sister offered her caring, sensitive nature as the one to stay by their father’s side and attend to his needs. Another sister is a therapist who works in rehabilitation with people with head injuries. Despite living out of state, she understood the medical language and wrote letters to Lee’s doctors. With Nancy acting as the hub, the sisters worked together to care for their father.

It was a lesson for Nancy—everyone can contribute to caregiving by drawing on their strengths. “I just learned that we all have our gifts, and that was my gift to be able to organize things and keep things in order,” she says. “Even though I would like to be like my sisters, they’d probably like to be more like me. We’re all given gifts for a reason.”

As a writer, Nancy felt she had to share her experience. But it didn’t happen right away. “It just takes a long time for your brain to process things and to grieve,” she says. The resulting book, Dancing with Lewy, not only includes Nancy’s story but also several of her father’s poems, which give a first-hand perspective of the man he was.

The title of the book alludes to how caring for someone with a brain disease requires a delicate balance. “It’s hard to be direct, especially with my father who was like, ‘You’re not going to tell me what to do’,” she says. “I just feel like it was a constant dance, with him taking a step and me taking a step, and sometimes we danced in harmony and sometimes we were miles apart.”

Dancing with Lewy also serves as a resource for others who are touched by brain disease. Nancy’s most important piece of advice for brain disease caregivers: Don’t do it alone. “You’ve got to get your rest,” she says. “No matter what your financial situation, there’s probably going to be help out there… Just don’t do it alone, because burning yourself out is not going to help anybody.”

Nancy tried to take one day each week for herself, a day when she wouldn’t visit her parents, and also planned a couple much-needed vacations, trusting her father was in good hands while she was away. Through her experience, Nancy knows that leaning on family members and other resources allowed her to maintain the strength she needed to continue caregiving.