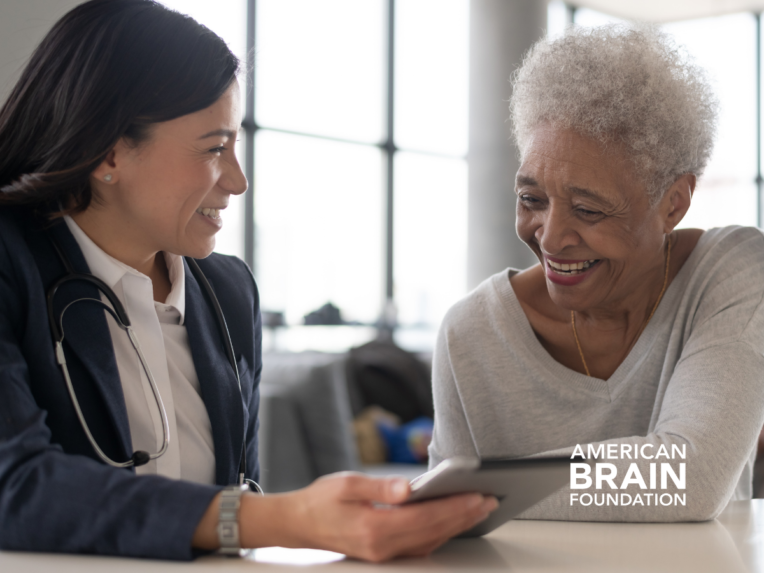 Our recent webinar explained the signs, symptoms, and risk factors of various brain diseases while emphasizing the importance of early detection in prevention and treatment.

The importance of early detection

One of the main challenges in brain disease research today is the time it can take between the appearance of the first symptoms and a patient getting a diagnosis. For example, people diagnosed with Parkinson’s disease might begin showing initial symptoms up to 10 years before their eventual diagnosis. For Dr. Stevens, the future of neurologic care lies in developing better early detection and referral methods. This will lead to quicker diagnosis and treatment.

If we can more effectively detect the presence of prodromal disease—the stage when a disease is present but has not yet given rise to symptoms—then doctors and researchers will be better able to develop treatment plans.

“It’s all about early detection,” says American Brain Foundation Board Chair David Dodick, MD, FAAN, “because if we know that someone has the disease or will develop the disease… there’s just a range of lifestyle changes” patients can make to prevent a worsening of symptoms. “And eventually new therapeutics, when they become available, will have the ability to prevent or significantly delay the onset of these diseases.”

Early detection of brain disease involves more than just clinical testing. Dr. Stevens says he can often get a good idea of what his patients are dealing with simply by talking with them during their visits. “I usually use all of my senses to gain information that will be valuable in trying to figure out the patient’s problem and to give them advice that, hopefully, will lead them on the path to improvement,” says Dr. Stevens.

As a neurologist, Dr. Stevens is acutely aware of the various signs and symptoms of different brain diseases. During the webinar, he described how certain symptoms and risk factors manifest in order to help us better understand and potentially detect early signs of brain disease.

Amyotrophic lateral sclerosis (ALS), also known as Lou Gehrig’s disease, is a neuromuscular disorder caused by degeneration of motor neurons in the brain and spinal cord.

Muscle twitching is a common early sign of ALS. This twitching is associated with weakness or shrinking of the muscles, which doctors refer to as atrophy. Some forms of ALS affect the muscles around the mouth and in the tongue, which causes difficulty speaking clearly. People with this form of ALS may experience twitching or atrophy of the tongue muscles.

Dr. Stevens notes that another early symptom of ALS, increased reflexes, can be tied to how the disease affects the upper motor neurons. “People can have abnormal, superficial reflexes, and sometimes a stiffness that goes along with this,” he says.

Muscle twitching or weakness and problems speaking are often some of the first signs of ALS a person will notice in themselves or a family member. These symptoms are not uncommon and could have many possible causes. So it’s important to see a doctor as soon as you notice them persisting beyond a few isolated incidents. Neurologists will be able to perform a thorough exam and decide whether further tests are necessary to make a diagnosis.

Mild cognitive impairment (MCI) as an early sign of dementia

Mild cognitive impairment (MCI) refers to a noticeable decline in memory and cognitive function that is not significant enough to disrupt general daily life. Symptoms of MCI typically appear earlier or to a more significant degree than general age-related memory impairment. “You can get up in the morning and get ready for the day. You can still pay your bills, you can drive your car and get to where you need to go… but cognitively things aren’t quite right,” says Dr. Stevens.

Signs of MCI include persistent difficulty with short-term memory, including issues with language recall. A person experiencing MCI may have trouble getting the right words out when having a conversation. They may also take longer than usual when figuring out complex tasks.

Detecting MCI is important because it can act as an early indicator of more serious brain disease in the future. Researchers have found that people who present with mild cognitive impairment symptoms are more likely to develop dementia later in life than people who don’t have MCI.

“If you did an age match comparison, patients with MCI may develop a definite dementing illness at a rate between 8% and 12% per year when you follow them down the road,” says Dr. Stevens. “That’s at a much higher rate than someone their same age who does not have [MCI]. So MCI doesn’t mean that you’re going to develop dementia, but it means that your treating physician needs to be aware and keep a close eye on you for any worsening of your cognitive  symptoms.”

Differences in Alzheimer’s disease and other forms of dementia

Dementia refers to many different conditions that result in impaired memory, language, and other cognitive functions. While impairment may vary, dementia is typically severe enough to interfere with daily life.

The major difference between these two forms of dementia is the process of degeneration. Alzheimer’s is an unrelentingly progressive degenerative disease. Dr. Stevens equates Alzheimer’s degeneration to a slope that progressively slides down with no relief. This does not mean it happens quickly, but once symptoms begin, they tend to get consistently more severe. Vascular dementia is not as consistently degenerative. A person with vascular dementia may have a small stroke that decreases cognitive function before a plateau period during which they remain stable. Another stroke may worsen their symptoms.

Dr. Stevens also discussed some of the ways Lewy body dementia (LBD) shares certain signs and symptoms with Parkinson’s disease. LBD is associated with abnormal deposits of the alpha-synuclein protein in the brain. These deposits, also called Lewy bodies, lead to problems with thinking, moving, behavior, and mood. Some common symptoms shared by LBD and Parkinson’s include stiffness, tremor, and cognitive changes. “We’re taught that Lewy body [dementia] is a bit different than Parkinson’s disease in that the cognitive changes precede or are much more dominant in [LBD] patients,” said Dr. Stevens.

The risk of developing dementia increases if a person has Parkinson’s disease. “Depending on the studies that you read, it can vary from 20% to 50% of people eventually will have some cognitive problem with their Parkinson’s,” says Dr. Stevens. “A significant number of people develop dementia sometime in the course of their illness.” However, just because a patient has Parkinson’s does not mean that they will develop dementia.

Some people with Parkinson’s also experience a REM sleep disorder where they physically act out their dreams in the middle of the night. This is not a common cognitive or neuromuscular symptom. But it can be a helpful early sign in predicting the onset of Parkinson’s.

Certain factors can contribute to the risk of stroke

There are many health issues that, while not directly related to brain health, can create the conditions for brain disease to develop if left untreated. This is yet another reason why early detection is so important. Knowing the risk factors of common brain diseases may enable doctors to suggest certain treatments or lifestyle changes that can reduce a person’s likelihood of developing these diseases in the future.

For example, Dr. Stevens points out that the number one risk factor for stroke or transient ischemic attack (TIA) is high blood pressure. Other common risk factors include high cholesterol, smoking, and excessive drinking. Blood sugar issues and diabetes can be attributing factors to vascular disease, which can increase one’s risk of a stroke.

“Another risk factor that we’ve come to appreciate—and there’s more data coming in the field of sleep medicine—is sleep apnea,” says Dr. Stevens. “We found that untreated sleep apnea is associated with a much higher risk for stroke, and if left unaddressed, could be an issue.”

There are also what some physicians refer to as cardiac or heart causes for having a stroke.

“It could be due to an irregular heart rhythm—a very common one is atrial fibrillation. There can be valvular disease that can cause clots to form that go up to the brain, or the heart could not be pumping effectively and create clots that could also go up to the brain,” says Dr. Stevens. If these health issues are detected early, doctors may be able to reduce the risk of stroke and TIA by prescribing an antiplatelet agent or an anticoagulant to reduce the risk of a future cardiac event.

These preventative, diagnostic and treatment measures may also help those who have already had a stroke. Research shows that the risk for both stroke and TIA increases in the year following an initial stroke when compared to people who have not had a TIA or stroke. “I think for people who have experienced [a stroke]… the key is to try and figure out the cause. Make sure you have a very thorough evaluation,” said Dr. Stevens. Determining an underlying cause could lead to more informed and effective preventative treatments to avoid further strokes.

Dr. Stevens believes that as research and studies continue, doctors will be able to reduce the risk of a second stroke following an initial stroke. But for now, a first stroke is a “red flag” and a warning for the possibility of another stroke or TIA in the future.

When you may need to see a physician

It is important to note that the signs and symptoms above may indicate the early stages of brain disease. However, many similar cognitive changes naturally occur with age. “I tell patients it’s analogous to having a slower processor on your computer. Meaning that you can bring up the information and the data, but it just takes longer,” says Dr. Stevens.

If you have concerns for yourself or a family member regarding potential brain disease, it is best to see a physician as soon as possible. Your doctor will be able to assess whether these symptoms are simply a part of the aging process or need to be investigated further.