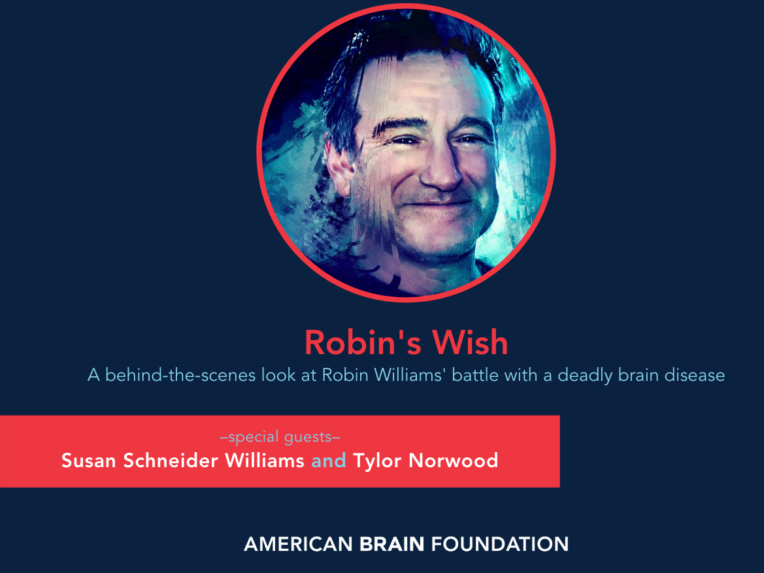 American Brain Foundation: Minneapolis — The late Robin Williams didn’t know he was fighting a battle with an unbeatable foe: a deadly brain disease called Lewy body dementia (LBD). Now, for the first time since his tragic death in 2014, his widow Susan Schneider Williams along with many of those closest to him have come together to share his story in a new documentary titled Robin’s Wish. Directed by Tylor Norwood, the film, which will be released on Tuesday, September 1 by Vertical Entertainment, sheds light on the final days of one of the greatest entertainers of all time and his battle with LBD.

In honor of the release of Robin’s Wish, the American Brain Foundation is hosting a live behind-the-scenes conversation with Schneider Williams and Norwood on the making of the film. A special and intimate event, attendees will get a rare look into the life and legacy of Robin Williams. Taking place on the night of the film release Sept. 1, 2020, at 8 p.m. ET, the event will be moderated by David Dodick, MD, FAAN, chair of the American Brain Foundation and professor of neurology at the Mayo Clinic College of Medicine. The webinar is free to attend and open to the first 5000 virtual attendees. Register to attend at www.americanbrainfoundation.org/robins-wish.

The event will provide a behind-the-scenes look at Williams’ struggle with LBD, the second most common form of dementia. LBD causes a progressive decline in mental abilities, with symptoms ranging from visual hallucinations to Parkinson’s disease-like symptoms, devastating patients and caregivers.

“In the end, it was a little known disease in his beautifully gifted brain that became his greatest and final battle,” says Schneider Williams.

“Robin’s Wish is a moment for us to understand the pain he felt as his talents and faculties rapidly slipped away, and moreover, how in the face of that terrifying reality, he was more heroic, more compassionate than any character he ever played in any of his movies,” says director Tylor Norwood.

The film includes Schneider Williams’ perspective and her journey from her husband’s passing to the coroner’s report, which, for the first time, revealed the presence of LBD. Knowing that a diagnosis would have made all of the difference to her family, Schneider Williams has dedicated her life to raising awareness about this fatal disease.

“Armed with the name of a brain disease I’d never heard of, I set out on a mission to understand it, and that led me down my unchosen path of advocacy,” said Schneider Williams.

Today, Schneider Williams is the vice chair of the American Brain Foundation board where she helped create the Lewy Body Dementia Fund. This American Brain Foundation fund supports a major scientific investigation to find a biomarker for LBD, innovative research projects by early-career scientific investigators, and programs for patients and caregivers coping with the disease. To date, the fund has raised more than $3.25 million.

“I hope this film rights a wrong that was done to him, and takes away a cloud that has unjustly hung over his legacy for far too long,” says Norwood.

The film will be available September 1st on Apple TV here.

“We had been discussing what we wanted our legacies to be in life; when it was our time to go, how we wanted to have made people feel,” says Schneider Williams. “Without missing a beat, Robin said, ‘I want to help people be less afraid.’ That was Robin’s wish.”

Since 1992, the American Brain Foundation has been investing in research to end brain diseases and disorders. We are a national foundation for the brain in relentless pursuit of causes, improved treatments, and cures. We unite donors and researchers to impact the lives of patients and those around them. We invest in research across all brain and all nervous system disorders knowing they are interconnected. This holistic, innovative approach allows us to build bridges between diseases and break new ground in research and application. Believing in a whole-brain approach gives us an edge in understanding and combating brain disease. We understand that when we cure one of them, we will cure many. Join us in the fight against brain disease at https://www.americanbrainfoundation.org/.