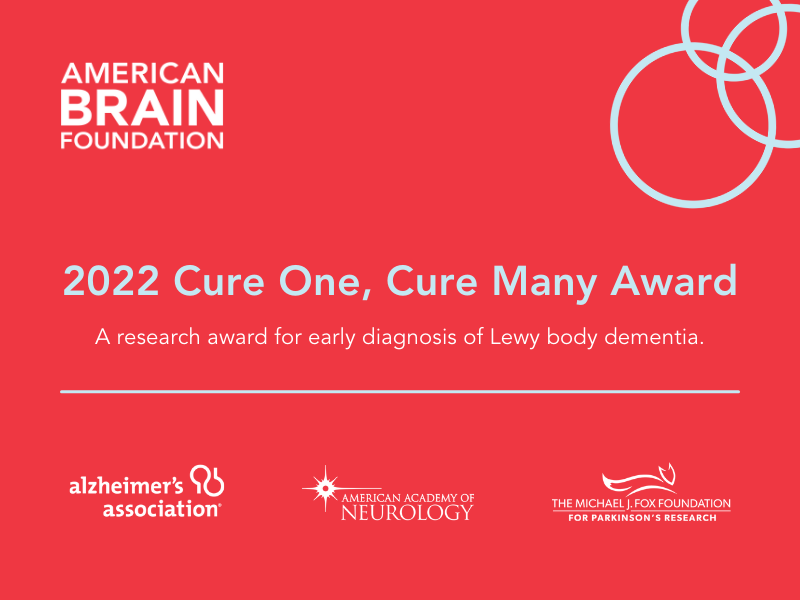 (MINNEAPOLIS, April 15) – The American Brain Foundation has partnered with the Alzheimer’s Association, The Michael J. Fox Foundation for Parkinson’s Research and the American Academy of Neurology to establish its 2022 Cure One, Cure Many Award: A research award for early diagnosis of Lewy body dementia. This $3 million, multi-year research award was created to improve the diagnosis of Lewy body dementia (LBD), which causes a progressive decline in cognitive function and is the second most common cause of neurodegenerative dementia, after Alzheimer’s disease.

Currently, LBD can only be definitively diagnosed with a brain autopsy after death. As a result of a delay in diagnosis and misdiagnosis, people with LBD and their caregivers endure daily challenges and uncertainty.

The goal of the American Brain Foundation’s 2022 Cure One, Cure Many Award is to attract the best minds in brain disease research to find a biomarker (diagnostic test) for LBD. The hope is that this will lead to an accurate method of diagnosing the disease giving patients and their loved ones clarity about the prognosis. This will also allow researchers to better study LBD and develop effective therapies.

American Brain Foundation Board Vice Chair Susan Schneider Williams spearheaded this initiative in honor of her late husband, actor and comedian Robin Williams, who received the diagnosis of Lewy body dementia after his death. She will officially announce the award during the Foundation’s upcoming April 21, 2021, Commitment to Cures virtual event.

“I am so hopeful about the inaugural Cure One, Cure Many Award and the changes it could bring. Diagnosis is vital—not only for the LBD patients and caregivers but also for the doctors and researchers. So much time, effort, resources, and life itself can be saved by having an accurate diagnosis,” said Williams.

“Better biological measures of brain disease are urgently needed to speed therapeutic development and improve care. More resources, research and collaboration are critical toward those goals,” said Todd Sherer, PhD, CEO of The Michael J. Fox Foundation. “Shared pathology across Parkinson’s disease and Lewy body dementia means that better understanding the biology of one can help advance research into the other, growing the impact of this program across diagnostic lines.”

“As an added benefit, it may also increase the understanding of degenerative brain diseases, including Alzheimer’s and all other dementia, leading to better diagnosis, improved treatments and effective prevention strategies that may benefit millions of people around the world,” Carrillo added.

Proposals for the award will be reviewed by a panel of preeminent scientists, and can address disorders across the LBD spectrum. Projects should specifically have the potential to identify one or more biomarkers that can be used to diagnose Lewy body dementia as the underlying cause of cognitive impairment.

LBD and other neurodegenerative diseases like Alzheimer’s disease and Parkinson’s disease share many similarities, and patients often experience overlapping symptoms—as well as the abnormal synuclein protein clusters called Lewy bodies. As a result, they are often mistaken for one another, which hinders diagnosis, treatment, and research.

“The American Brain Foundation promotes and invests in research across the whole spectrum of brain diseases and disorders in the belief that when we find a cure for one brain disease, we will find cures for many. Our holistic approach focuses on building bridges between different brain diseases to break new ground in both research and application,” said Jane Ransom, the Foundation’s executive director.

Applications for the 2022 Cure One, Cure Many Award will open on July 1, 2021. Grant winners will be selected and announced in December 2021.

To learn more about the award and to see how you can help support this initiative, visit americanbrainfoundation.org/cocm.

To learn more about the application process, visit aan.com/cocm