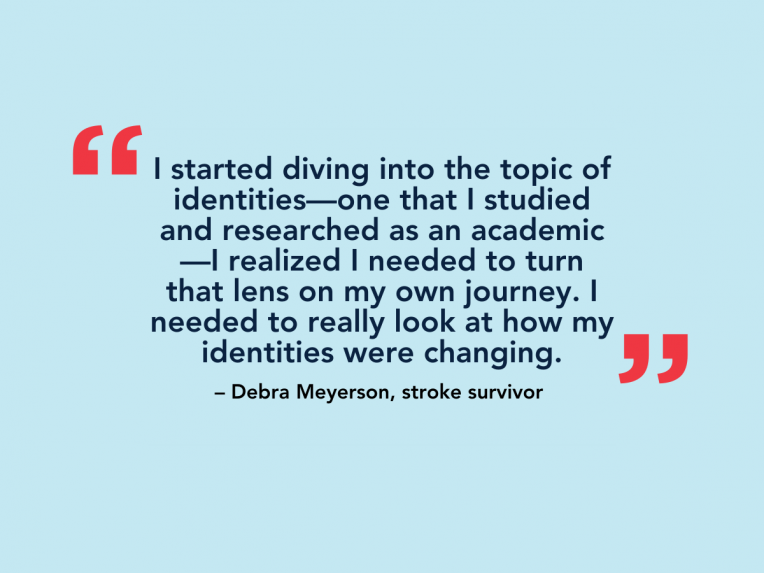 Debra Meyerson was a tenured Stanford University professor and happily married with three teenage children. She was active and fit. But then a severe stroke nearly killed her and left her with a paralyzed right side and no speech.

After her stroke, Debra focused almost completely on rehabilitation therapy for three years. She was desperate to get back to who she was. Eventually she made a lot of progress. But Debra still walked with a limp, had no function in her right arm, and, most devastatingly, had limited speech.

At the end of her medical leave at work, she had to give up her tenured position at Stanford. This was another blow—a “second trauma” to life as she knew it.

Debra’s life forever changed. Not only was her body different but her identity as a professor was gone as well. Debra now had to not just fight to recover more of her physical abilities. She also had to embrace her new identity as a stroke survivor. Finally, she needed to build a new life consistent with her new capabilities.

The need for emotional resources

Through her experience, Debra found there was a major gap in emotional resources for stroke survivors. This includes the often painful but crucial work required to consciously and deliberately rebuild one’s identity and life.

A large tool in this process for Debra came through authoring a book with the help of her family. She began to write the book to “prove she could.” As a scholar, writing was a large part of her pre-stroke identity and something she was trying to hold onto. “When I started diving into the topic of identities—one that I studied and researched as an academic—I realized I needed to turn that lens on my own journey,” she says. “I needed to really look at how my identities were changing.”

Part of that journey was recognizing that no matter how hard she worked, she would most likely be living with some degree of disability for the rest of her life. Writing the book helped her through the emotional journey. She began to view the book as a way to help others and find a new purpose. “That was another key discovery: how important it is to have purpose and how that could help me rebuild a rewarding life,” she says.

Debra’s book, “Identity Theft: Rediscovering Ourselves After Stroke,” aims to assure survivors and caregivers that they are not alone in their physical and emotional journeys post-stroke. Through the book and Stroke Onward, the nonprofit she and her husband created, she hopes to collaborate with others to raise awareness mostly for the emotional aspect of stroke. “When acute brain disease such as stroke occurs, it can immediately change your life and the identities that you and your family previously had lived,” she says. “We are focusing the efforts of Stroke Onward on the emotional journey to rebuild rewarding lives because too little is happening in this space.”

Even though Debra recognizes that each person’s recovery looks different, she does believe there are some universal truths.

Debra’s lives as a wife, mother, daughter, sister, and person who loves to exercise and play sports still exist. “I think I still have the same values and many of the same personal characteristics that are part of my identity: I’m still determined, willful and independent,” she says. “The biggest change is that now my identities also include stroke-survivor and person with disabilities.” Debra hopes to continue to share her story and advocate for the emotional needs and resources for stroke survivors and their families.

To learn more about Stroke Onward and it’s mission of supporting stroke survivors, families, carepartners, and the healthcare community in navigating the emotional journey to rebuild identities and rewarding lives after stroke, visit their website at strokeonward.org.