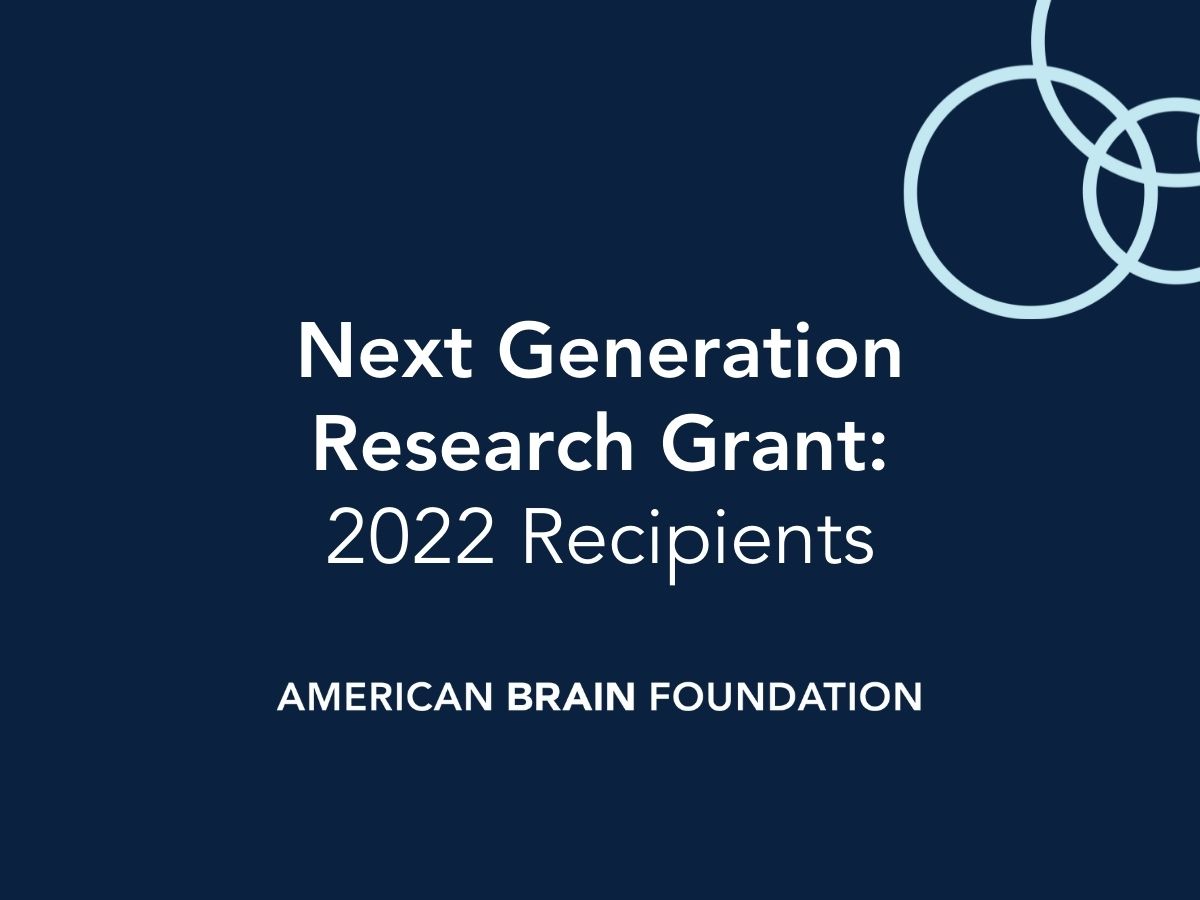 Meet this year’s grant recipients and learn how their innovative research will uncover new insights into brain disease.

The American Brain Foundation was founded to bring donors and researchers together in the fight against brain disease. Our Next Generation Research Grants fund the innovative research of the best and brightest early-career investigators across a broad spectrum of brain diseases and disorders.

With the support of our donors, we aim to inspire a passion for knowledge and discovery, and launch long-term careers for the next generation of clinical neuroscience researchers. Funding research through the Next Generation Research Grants program supports our hope of finding better treatments, prevention, and cures. We fund this so that one day we can all enjoy life without brain disease.

Alzheimer’s, LBD, and Other Dementias

Dr. García-Cordero’s research will study Alzheimer’s disease pathology in the context of corticobasal syndrome and progressive supranuclear palsy. The results of her study will contribute to more accurate diagnosis criteria and will help researchers identify people who may benefit from early drug therapy. In addition, these results may tell us about the occurrence of co-pathology across all neurodegenerative diseases.

Diagnosing dementia is often challenging because there can be a substantial overlap in symptoms between different types of the condition. Dr. Motter’s research will address the need for simple, inexpensive, non-invasive diagnostic tests for early detection of neurodegenerative diseases by exploring differences in odor memory across different types of dementia. The ultimate goal of this research is the development of a simple diagnostic test, which will help ensure that patients receive an accurate prognosis and the best treatments for their specific condition.

“Alternative polyadenylation in the etiology and pathogenesis of ALS”

Dr. Arnold’s research will identify new genetic risk factors for ALS. This crucial information will aid in developing effective treatments for sporadic ALS and help doctors slow the progression of the disease. By identifying new genetic risk factors for ALS, researchers may be able to rapidly expand the number of people with ALS for whom disease-modifying treatments will be available.

Speech can serve as an indication of a patient’s risk of aspiration, a major factor contributing to death. Dr. Shellikeri’s research will develop speech assessment tools that will analyze natural speech in people with ALS, Parkinsonian, and Lewy body spectrum disorders. These assessment tools will help doctors screen patients for speech impairment so they can provide more accurate prognoses and specific treatments to manage these symptoms.

“A multimodal exploratory study of sex differences in Tourette syndrome”

While there is a lower prevalence of Tourette syndrome (TS) in females compared to males, tic severity and impairment are consistently greater in females. Dr. Szejko’s research will study sex differences across different age groups to compare characteristics such as intensity and frequency of tics, changes over time in tic behavior, and differences in treatment response. The study results will inform researchers’ understanding of the causes of sex differences in TS and other neurodevelopmental disorders.

Dr. Kleiman’s research will study speech behavior in older adults and identify social and medical factors that cause a decline in speech. Identifying these factors may lead to the development of remote, virtual, or phone screenings that can aid in early detection of pathological cognitive decline.

In older adults, depression is associated with a decline in executive function. This corresponds with a higher risk of cognitive and functional decline and an increased likelihood of dementia. Currently, there are no FDA-approved treatments for older adults with depression. Dr. Szymkowicz will research whether combining two promising treatments—novel computerized cognitive remediation (nCCR) and transcranial direct current stimulation (tDCS)—can enhance the brain activity and cognitive functions of older adults with depression, potentially leading to new treatments.

“The Role of the Microbiome in Drug Resistant Epilepsy”

Drug resistant epilepsy (DRE) is characterized by failing to achieve freedom from seizures after trying two or more anti-seizure medications (ASMs). One in three people with epilepsy experience DRE. Dr. Lemley’s research hypothesizes that the gut microbiome contributes to seizures in people with DRE. This is done either by directly inactivating medications or indirectly through its effect on neuroprotective bodily mechanisms. Identifying the microbiome differences between people with DRE and those with well-controlled epilepsy could improve ASM selection and effectiveness.

Dr. Dumkrieger’s research will use wearable sensors and speech and cognitive function assessments to help predict migraine attacks. Accurately identifying a migraine in the pre-headache phase of an attack may lead to substantial improvements in symptom management. Earlier warnings could give people a greater sense of control over migraine by helping to identify factors that worsen migraine attacks and enable more effective avoidance of these triggers.

In MS, the immune system receives an incorrect signal and attacks myelin, the insulation that covers the brain’s “wires,” or axons. This leads to neurologic symptoms such as weakness, numbness, and imbalance. Dr. Gadani’s research will study why myelin repair does not occur effectively in people with MS. This research could lead to new therapies aimed at stopping myelin destruction and improving repair mechanisms.

Myotonic dystrophy, the most common muscular dystrophy in adults, has no effective disease-modifying therapies. However, promising recent research has used adeno-associated virus (AAV) to deliver therapies that modify the genes that cause neuromuscular diseases. Dr. Carrell’s research will develop a disease-responsive mini-gene to precisely control the therapies delivered by AAVs and prevent the side effects that have made previous therapies ineffective.

Duchenne muscular dystrophy (DMD), the most common childhood muscular dystrophy, is caused by a genetic mutation, and there is currently no treatment that can reverse or halt the progression of the disease. Dr. Nicolau’s project will test whether homology-independent targeted integration (HITI) can be used to correct the most common mutation in the DMD gene. This research aims to aid in the development of an effective treatment for DMD that can stop or even reverse the progression of the disease.

Because Parkinson’s disease (PD) has no known cure and results in progressive physical and cognitive decline, end-of-life (EoL) care is of particular concern. Identifying EoL care disparities, such as racial differences, is a crucial first step toward eliminating them. Dr. Aamodt’s study will be the first to explore EoL preferences or perceptions among diverse PD populations, and will help us better understand disparities in PD and other neurodegenerative diseases.

Charcot-Marie-Tooth disease (CMT) is a family of genetically diverse, hereditary neuromuscular diseases for which there is currently no FDA-approved therapy. Dr. Rehbein will study the use of ultrasound as a biomarker to view the progression of disease across different forms of CMT. This research may lead to a reliable, cost-effective biomarker that will allow researchers to evaluate the effectiveness of new treatments for CMT diseases.

Despite Parkinson’s disease being the second most common neurodegenerative disorder, there are currently no disease-modifying therapies available for this condition. Mutations in the LRRK2 gene have been considered a causative factor in Parkinson’s disease, but not all carriers of this gene develop Parkinson’s. Dr. Crotty’s research will use metabolomics—an emerging, powerful tool for studying large-scale data and information—to investigate the underlying mechanisms through which Parkinson’s develops in individuals with the LRRK2 mutation. The goal of this research is to identify potential biomarkers that can aid in earlier diagnosis and treatment for Parkinson’s.

Minimizing treatment times to maximize outcomes is a major research and public health priority for acute ischemic stroke (AIS). Mobile stroke units (MSUs) accelerate stroke treatment during the first hours after stroke by bringing the stroke center to the patient. Dr. Czap’s research will evaluate outcomes for people with more severe types of AIS who are treated by MSUs in order to develop a protocol that reduces the time to treatment.