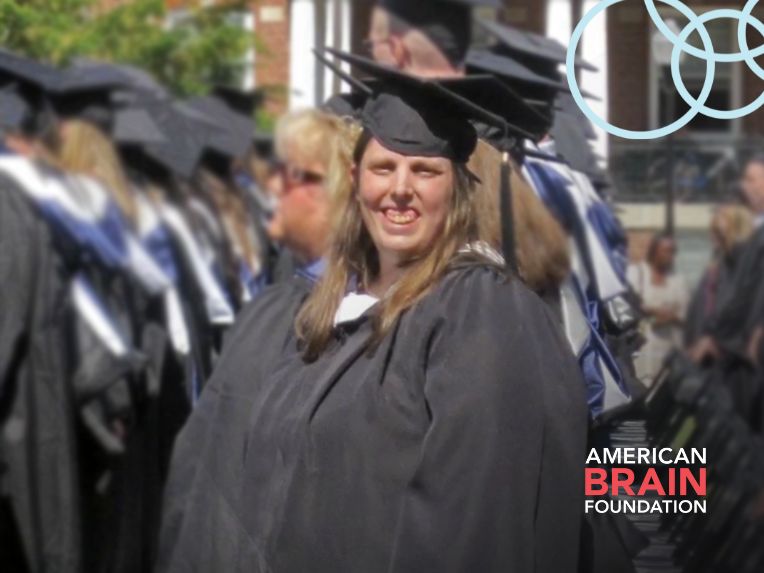 After a childhood accident left her with a traumatic brain injury, Courtney Fraser dealt with a range of complex symptoms. Her challenging journey toward an epilepsy diagnosis and navigating treatments has inspired Courtney to share her story and help others that may be struggling.

For most of her life, Courtney Fraser has lived with epilepsy, memory problems, and mental health issues like anxiety and depression resulting from a traumatic brain injury (TBI). A few days before her fourth birthday, Courtney experienced a head injury while out on a hike with her family. A tree fell, hitting both Courtney and her father, and while her father’s injuries were relatively minor, Courtney was hit on the head and had to be rushed to the hospital.

She was diagnosed with a subdural hematoma, which occurs when a blood vessel between the brain and skull is damaged, causing a blood clot that places pressure on the brain. Severe subdural hematomas often cause lasting problems with brain function. Though Courtney didn’t hear the term until she was much older, doctors explained that she had suffered a traumatic brain injury.

Because brain diseases are connected, often diseases and disorders like epilepsy and TBI share linked or overlapping symptoms. In Courtney’s case, doctors told her family that she was at an increased likelihood for developing epilepsy after her TBI—but due to a lack of awareness and education about the specific signs, she went another 11 years before getting an epilepsy diagnosis. For many people like Courtney, uncovering the connections between multiple brain diseases and disorders could mean earlier diagnosis methods and more effective treatments, making the conditions easier to manage.

We spoke with Courtney about how her TBI symptoms and epilepsy affect each other, the difficulties she has experienced finding treatments that are effective for both conditions, and the importance of research and awareness for people living with brain disease. You can read her story below.

Growing up, Courtney dealt with memory problems and a learning disability as a result of her TBI. She was easily frightened by loud noises—a symptom of PTSD for which she wouldn’t receive a diagnosis for many years—and had sudden lapses of consciousness which, unknown to her family at the time, were actually a type of seizure.

“My family would say that I would stare off into space,” says Courtney. “I wouldn’t respond when they were saying my name.”

Courtney was finally diagnosed with epilepsy at age 15, after having a seizure and ending up in the hospital while on vacation with her family. It was only after her diagnosis that Courtney and her family realized she had been experiencing absence seizures for years as a result of her TBI.

Courtney’s TBI also caused lasting memory problems. She jokes that she has a “double dose of memory issues” because epilepsy also causes memory complications. Because of this overlap, Courtney now wonders whether some of her TBI symptoms were masking other early signs of epilepsy as a child. It was only recently that doctors officially confirmed the connection between both conditions. After participating in a research study, doctors told her that she most likely had post-traumatic epilepsy (PTE), which refers to recurrent and unprovoked seizures caused by a TBI.

While getting an epilepsy diagnosis was a step in the right direction, Courtney still experienced many challenges. The complex relationship between TBI, epilepsy, and anxiety and depression has made managing her various symptoms especially challenging at times.

“Trying to balance everything when you have multiple brain issues going on and you don’t know which one’s causing what—it’s so difficult,” says Courtney. She has struggled with anxiety and depression since she was a teenager, often tied to her TBI symptoms or epilepsy. She recalls avoiding normal high school activities like school dances out of fear of having seizures.

Courtney says one of the main difficulties in navigating both TBI and epilepsy has been finding treatments that work for both conditions. Many of her medications for one condition cause side effects that act as triggers for the other, such as difficulty sleeping. Courtney points out that many epilepsy medications “cause trouble sleeping and tiredness—but lack of sleep can cause a seizure.”

The Importance of Awareness and Advocacy

As an adult living with both TBI and epilepsy, Courtney has decided it’s important to share her story. Many brain diseases and disorders don’t have obvious, outwardly visible symptoms and can be difficult to diagnose. By educating people and spreading awareness, Courtney hopes she can help others learn how to better support people living with brain disease.

Courtney’s research also helped her learn how to better manage her conditions. As an adult, she’s been able to find neurologists that specialize in epilepsy. She emphasizes the importance of finding doctors who truly understand your condition and can offer optimal care. While finding the right medications is an ongoing challenge, today Courtney works with specialists to find the best options to control her seizures with minimal side effects.

Though Courtney’s path has not been easy, it has inspired her to become an advocate for many others like her. Through her own experiences, Courtney knows it’s essential for people to understand seizures and epilepsy in a school setting. That’s why she helped advocate for legislation in Maryland requiring K-12 school staff to be seizure first-aid certified. After three years of fighting for the legislation—called Brynleigh’s Act (Senate Bill 299)—Courtney was happy to see the bill passed earlier this year.

TBI and epilepsy aren’t the only brain conditions and diseases that have affected Courtney’s life—her grandmother had Alzheimer’s disease. The family noticed that she was often confused and forgetful, but they didn’t know she had Alzheimer’s until she passed away in 2020. Courtney already knew she was at a higher risk for developing Alzheimer’s due to having epilepsy, and having a family history of the disease increases that risk even more.

Courtney hopes that with more research, doctors can explore potential links between brain diseases like Alzheimer’s, epilepsy, TBI, and others. “There are connections between a lot of these conditions that people don’t realize,” says Courtney. “My grandma also had brain disease—Alzheimer’s and dementia—so she had memory issues just like I do. Seeing her deal with Alzheimer’s made me realize even more that it’s not just people with TBI and epilepsy that have memory issues.” A better understanding of these diseases will make it possible to develop early diagnosis methods and more effective treatments in the future.

Courtney believes brain disease research is crucial not only because it leads to better treatments but also because it educates, promotes awareness, and turns people into advocates. The more people know, the more they care. When asked what she would say to American Brain Foundation donors, Courtney said, “I would say thank you for donating because it does really impact people’s lives.”

The American Brain Foundation is committed to finding cures for brain diseases. Donate today to make a difference. With your help, we can all experience life without brain disease.