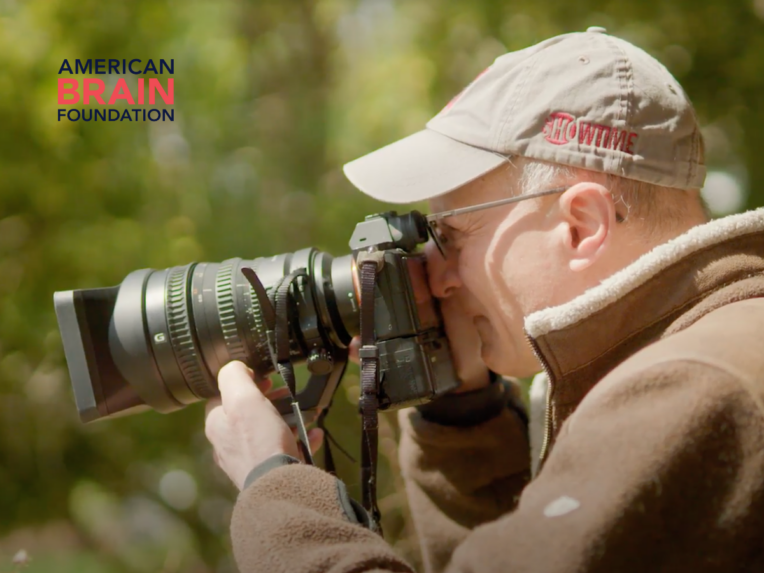 After three craniotomies to remove benign brain tumors, this active photographer is navigating life with the help of his partner

A set photographer, avid cyclist, speed skating team member, and father of three, Matt was living a full, active life. But in 2010, he began having unusual episodes. The first one happened while he was out on one of his daily 20-mile bike rides.

“On that particular day… I started getting this incredible pulsing,” he says. “And then I got tunnel vision, where I could only see maybe 10 or 15 percent of what was directly in front of me and everything else was gray. And then it went away 20 minutes later.” While Matt thought it was odd, he chalked it up to making too much of a physical effort.

Then the episodes began happening more frequently. About once a week, Matt experienced a pulsing shadow on the left of his visual field that created an effect like a whirring ceiling fan with a light behind it. He kept notes about how often this would happen, the date, and how long it lasted. Initially, his general practitioner thought Matt might be having focal seizures or migraine symptoms.

“I finally got referred to a neurologist who said, ‘I wish all my patients were as good as you had been about keeping notes,’” says Matt. “Because he said, ‘Before I even send you in for an MRI, which I’m going to do, I can pretty much tell that you have a brain tumor.”

A Diagnosis and Treatment

While the news was scary, Matt was ready to face it head-on. “I had to put it in perspective and there was nothing I could do to change that directly,” he says. “There was no way to control it.”

Matt was officially diagnosed with meningiomas, which are tumors that grow from the membranes that surround the brain. While they are often benign, the growth of these tumors can put pressure on the brain. Thus they can cause symptoms and potentially affecting a person’s ability to work or function the way they normally would.

As an active person, Matt’s meningiomas impacted his daily life. “I was really angry,” he says. “Why should I get tumors? I eat healthy, I do everything healthy, I work out… I wanted to know why, and there is really no why. It happens.”

Over the past 11 years, Matt’s treatment has included three craniotomy operations to remove five tumors, as well as radiation and chemotherapy. The tumors were found to be pushing on his occipital lobe, the part of the brain that interprets vision, and his parietal lobe, which helps in spatial awareness and other important functions. Following the third surgery, Matt began experiencing more struggles in his daily life.

“About three months after my radiation treatments, I started losing my balance,” Matt says. “I started feeling dizzy all the time. And I wasn’t sure what it was because it came on over the course of two or three days. And I thought, ‘Well, I just have some kind of virus and it’s going to go away.’ But it never went away.”

None of Matt’s doctors can say whether his vertigo and balance issues are permanent. These symptoms not only make it tough for Matt to continue skating and cycling as he had previously but also affect his work as a photographer. It’s now two years after his last surgery, and Matt estimates that only about a third of what was affected has come back. So he’s learning to live with his brain disease and keeping a positive outlook.

Working in a Visual Career

In returning to work, Matt found ways to compensate for his visual difficulties. But one day while working on set during a fast-moving fight scene, he got into a scary situation. “Because of the way that I now see things post my last surgery, it’s hard for me to see someone over there and remember in fact that they’re over there when I’m looking back at something else,” he says. “I got in the way during one of the takes and I could have gotten hurt. I could have been knocked down, I could have had a blank shot at me.” Shaken after that incident, Matt was asked to take a break from work.

Matt’s partner Angela recognizes the physical demands of his job. “He’s cut back because he needs more downtime in between. It’s physically demanding, it’s mentally demanding. It’s visually demanding. And that’s exhausting for his brain to adapt to… He is working three times as hard as a neurotypical person.”

Matt is now in his 60s and his meningiomas have affected his timeline for retirement. “If I feel I can’t deliver or decide that I’m unable to deliver, then I’ll just hang the hat up at that time,” says Matt. “It’s made me probably speed up my retirement from the industry by, I would say, five years.”

Matt’s partner Angela provides support and care, but it can be tough navigating all of the obstacles brought on by his meningiomas. “It’s managing this long-term chronic condition that can change at any point,” she says. “Nothing is scheduled or predictable.”

Not only does she help Matt complete some daily tasks like filling out forms but Angela has also had to adjust to changes in his personality and memory. “There have been some really sad moments where there are things that have been really, really important to me and he doesn’t remember them at all,” she says. “It’s just not there.”

“Essentially you are your brain. And if your brain changes, you are completely different,” she explains. “The person that we knew… to a certain extent died on that operating table. And the person we got back looks exactly like that guy, with a lot more scar tissue on the back of his head. But it’s not the same person, and he is navigating a world that is very, very different.”

A Sense of Loss

Matt continues to do physical therapy to help with his sight and executive function. He has learned tools and strategies to navigate the day-to-day, knowing that his impediments are always there. Still, he continues to stay active in any way he can. However, everyday situations, like walking in a crowd or reading a book, can be difficult.

“It’s been tough for me to count on the way I have perceived things in the past and do it the same,” he says. “I have lost the vision on my whole left peripheral. So, unfortunately,—and this is a really sad part of it—I’m unable to drive, something I depend on… I’ve lost a fair amount of independence.”

Matt feels the greatest sense of loss is in his relationships with his children. “I think, whereas they saw me as the dad and strong and not damaged, now I’m not as strong,” he says. “They can’t count on me as much to help them do things.”

Angela feels these changes too: “Each of us exists within a fabric of interactions, and it’s like you pull one thread out and everybody has to adapt,” she says. “It has created a completely different dynamic because Matt has become more dependent on other people… And that can change on a daily or weekly basis.”

Matt continues to move forward, but he has concerns about developing more tumors in the future. With the scope of his surgeries, he may not be able to have additional operations. This could mean more radiation and less targeted treatments.

Due to their experience, both Matt and Angela recognize the need for brain disease research to make a difference for the individuals and families affected by brain disease. “It’s important to support people with brain disease because it could happen to anybody,” says Matt.

“And so it’s so important to do research on how the brain works, what treatments are effective,” Angela agrees. “There’s just so much we need to know…It’s so important for us to learn as much as we can about essentially the next frontier, which is in our own heads.”