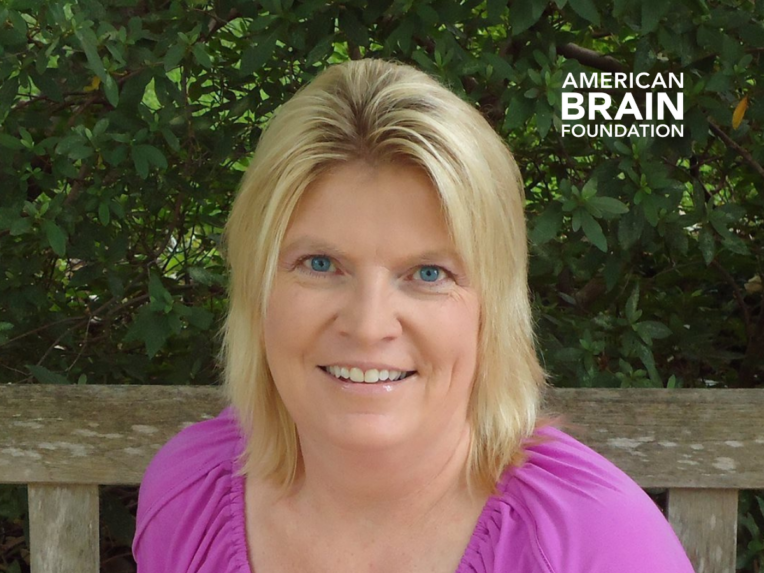 In October 2018, Kelly Rodenberg left a massage appointment thinking she’d pinched a nerve in her neck. But later that night, Kelly awoke from a deep sleep thanks to lightning bolts running through her left hand. She looked down to see her hand involuntarily shaking.

Over the next few days, she noticed subtle changes. She had trouble getting her left arm in her sleeve. She cut her thumb while slicing an apple and didn’t feel a thing.

But when Kelly, who worked as an admin for 35 years, saw a trail of Rs on her computer screen that she couldn’t explain, she knew it was time to call her local clinic. She realized that she could no longer feel her left hand connecting with the keyboard.

When she called, she was told it was a three week wait to get an appointment. A few hours later, she got a call from a nurse who read the transcript of her call and urged her to see a neurologist.

Within just a few days, Kelly would get a life-changing diagnosis of glioblastoma, undergo major brain surgery and begin a lifelong journey. We spoke to Kelly about her journey with brain disease and how a healthy dose of humor helped her through.

When Kelly saw the neurologist, he asked her to do some very simple things. This included flexing her hand, smiling really big, and walking in a straight line. The neurologist noticed her mouth drooping a little bit on the left side, and she was walking a bit crooked. “And I had no idea,” she says. “That’s how subtle it was.”

An MRI confirmed a golf-ball-sized tumor above Kelly’s right ear, which was affecting the left side of her body. The tumor was a glioblastoma, a rare and aggressive type of cancer occurring in the brain or spinal cord. “You sit up in your chair a little bit straighter when the neurologist starts talking about your lifetime in months versus years,” she says.

The neurologist wanted to do surgery as soon as possible. Kelly and her husband opted to get a second opinion at Mayo Clinic because Kelly’s husband got treatment there. The surgeon there told her he didn’t think waiting a few days would make a difference. “From a patient standpoint, we were placed at ease,” she says.

The surgery itself was very successful. She was able to go home less than 48 hours later, which is not always the case after brain surgery. The next month was a brain resting period, and then Kelly started chemo and radiation.

Finding the Light and Love

Kelly says her darkest days during the whole ordeal were during radiation, which lasted five days a week for six weeks. Kelly began to feel depressed. Even the thought of getting out of bed to brush her teeth felt overwhelming. So she searched for an outlet. “I ended up just sitting down at the computer and writing a book,” she says.

For Kelly, it was about finding the good in a tragedy, finding the light and love in a heavy diagnosis such as glioblastoma. But it was also about processing her experience with her signature good humor. The book, titled “There’s Something Going On Upstairs: Learning to Laugh My Way through a Cancerous Brain Tumor, One Chemo Cycle at a Time,” is part memoir, part patient roadmap and part comedy.

She writes in the book’s prologue: “About fifty people have encouraged me to write a book. No, I haven’t literally been keeping track, but after dozens of nudges, I began paying attention.”

Writing her book gave her reason to wake up and allowed her to process all that had happened. It also gave her a chance to write the humorous, insightful book she wished she could have read while navigating glioblastoma.

The positive response to her book showed Kelly that she had filled a need. She had helped people like she set out to do.

Life as a Survivor

Just like the neurosurgeon at the Mayo Clinic predicted, the movement in Kelly’s left hand didn’t get any better. “It’s not any worse, but I still have zero use of it,” she says. It makes day-to-day activities, like driving, more difficult. Even folding a load of clothes takes three times longer than it ever did.

More than two years removed from her surgery, Kelly still feels uncertainty about the future. “I still feel that life is lived MRI to MRI, in eight week chunks,” she says. “Until you get that validation or check of approval that, OK, your MRI was good, you don’t plan all that far out.”

But Kelly has come to accept and even embrace her new life. “You learn to appreciate every day, every moment. You burn the candles, you use the good dishes, all that kind of stuff that I didn’t honestly think that much about before October 2018.”

Kelly’s struggle with an invisible disease such as glioblastoma also fostered more empathy. “Nobody can see it. It’s not a cast, it’s not a crutch, it’s not a wheelchair,” she says. “People walking down the street would never guess that I had a brain tumor. It’s just opening up your heart a little bit more and trying to see what people go through, even though it’s not visible to the human eye necessarily, and everybody needs a lesson in that.”

Kelly has taken that increased empathy and turned it into a passion for patient advocacy. She’s active in online patient communities and before COVID-19 she was doing free speaking engagements at long-term care facilities to educate residents on strokes and brain tumors.

She urges patients to give themselves time and grace. “The biggest thing that I could encourage other glioblastoma patients is just to be patient with yourself because it is a very life-changing disease,” she says. “Once you wrap your brain around that it’s something that’ll never go away, I think you give yourself more grace because it will be with you for life.”

As part of her advocacy, Kelly regularly sends copies of her book to people she’s met either in person or in online patient communities. She always inserts the same bookmark with a quote: We can’t always choose the music life plays for us, but we can choose how we dance to it.

For Kelly, that means turning a life-changing diagnosis into a way to connect with other individuals living with a brain tumor and help them navigate the path a little bit easier.