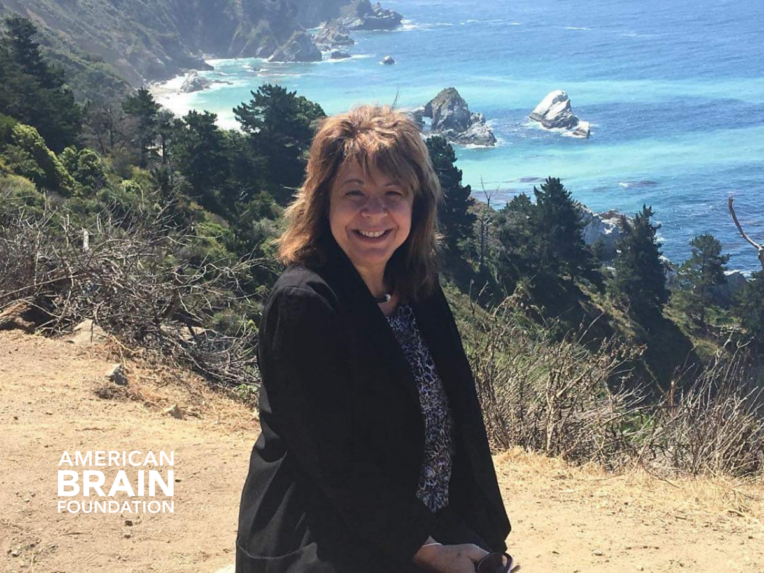 In the span of a few months, two different brain diseases changed Michele Fitzgerald’s family forever. For the 43-year-old wife and mother of two daughters, the first blow came when her 4-year-old daughter was diagnosed with pons glioma, a rare and aggressive brain tumor with a six-month survival rate.

Michele and her husband spent much of the next few months in the hospital at their daughter’s bedside. But one day, Michele experienced pain in her head. “It was more than a headache,” she says. “It was like my head exploded.”

She didn’t know it at the time, but a brain malformation she likely had since birth had ruptured. An arteriovenous malformation (AVM) is an abnormal connection between arteries and veins in the brain or spine. Most people who have them, like Michele, are unknowingly born with them. AVMs can rupture, cause bleeding and seizures, and be life threatening.

“I was lucky because it happened at Children’s Memorial Hospital,” Michele says. Because she was already in the hospital with her daughter when the brain malformation ruptured, she was able to receive immediate attention from a nurse who figured out she was hemorrhaging. “I could have been at home alone, I could have been driving my car. I could have been anywhere.”

Doctors were able to stabilize Michele and transfer her to another hospital, where she remained for two weeks. However, the malformation needed to be removed or another rupture could kill her. But Michele was hesitant to have brain surgery that would make her unavailable to her sick daughter. “It was incredibly difficult to be dealing with both of those situations at the same time,” her husband Bruce says.

Devastatingly, her daughter passed away, and Michele knew she had to get the surgery for the sake of her other young daughter and husband.

Before her brain malformation ruptured, Michele found remembering things and multitasking easy. She enjoyed a successful career in consulting. She was a voracious reader and enjoyed cooking.

But after the craniotomy, Michele spent many months in recovery without fully understanding what was happening around her. In addition to grieving the loss of her daughter, she experienced drastic changes in the way her brain functioned. She struggled with spatial recognition. She experienced hallucinations. Often, she didn’t know what room she was in and was unable to remember two-step directions.

Her cognitive abilities are still affected more than a decade later. In times of stress, they decline. She once called her husband at work 15 times without any memory of the previous calls. Frequently, her family has to tell her she’s repeating herself. And at first, she didn’t believe them. “They have told me that they felt defensive themselves because I would feel like they were lying to me,” she says. It was hard, at first, to accept that her perception was different than what was happening.

“When someone’s brain is not functioning correctly, it impacts everything in their life. It impacts how they think, how they feel about themselves…how other people feel about them,” says Michele. “It’s a very hopeless and helpless feeling.”

Uncovering a Path to Survival

AVM profoundly changed Michele’s life, and accepting those changes and adjusting to them took time. However, after 18 years and continued appointments with a neuropsychologist, Michele has made a lot of progress. She also learned some tricks to help manage life with her cognitive abilities. “My brain doesn’t function the same way,” she says. “I have a hard time holding on to information depending upon how I’m feeling or what I’m doing.”

To help with her short-term memory, Michele writes notes to herself or saves reminders in her phone. She sets alarms while cooking and often asks her husband to help her remember things. However, despite the challenging path of survival and recovery, Michele has noticed some positive effects in her new changes as well. She has grown to appreciate the people around her more. “I have a lot more empathy than I ever did,” she says.

Her husband Bruce says the trauma they have experienced as a family has helped them appreciate their day-to-day life. “We just appreciate being alive more,” Bruce says. “I think it’s important to talk about it, to make people aware of how devastating the problem can be, yet, that there’s definitely a path to surviving.”

Michele connects with others who have been impacted by brain disease through online support groups. She provides and receives help from others, and through this, has made peace with her new identity.

“I’ve just learned how to think about things differently…I had to start looking at values in myself differently,” Michele says.

The American Brain Foundation funds research across a whole spectrum of brain diseases to improve prevention, treatment, and cures, giving hope to this family and others. With your help we can provide hope and help to future patients and their families. Learn more about how brain disease has affected others through these stories or donate today.