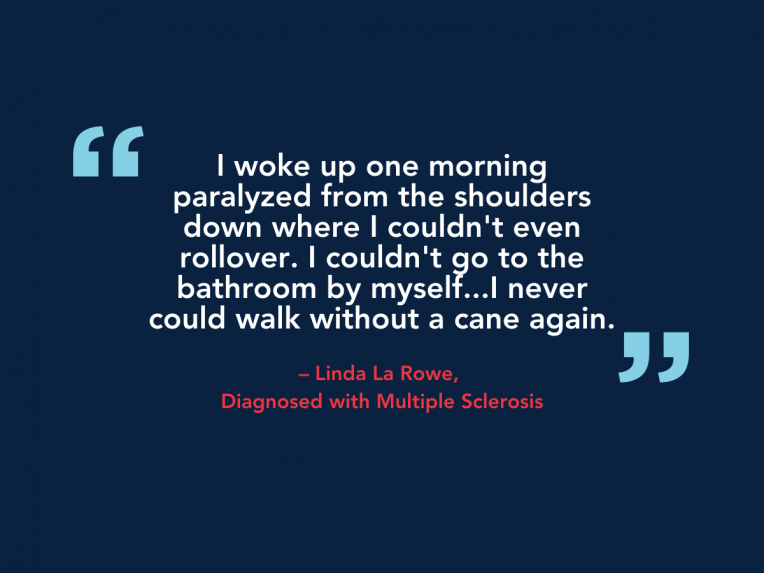 It’s only in looking back that Linda recognizes the earliest indications of multiple sclerosis (MS). In high school, she recalls a time when her right arm suddenly stopped functioning while she competed at a swim meet. She endured back issues as a cheerleader and throughout her 20s, and experienced periods of disorientation in her 30s but attributed her symptoms to other causes.

She finally reached a point where she couldn’t ignore them anymore. A startling episode where she lost her eyesight landed her in the hospital. Her doctor dismissed it as a virus and assured her she’d regain her eyesight in a matter of weeks. Though Linda managed to return to work about three months later, she couldn’t see clearly. She couldn’t work on her computer or read like she used to. As a makeshift solution, Linda would use a notecard to keep her eyes focused on the lines in her book or on her computer screen. With limited sight, she learned to cook from memory and by touch. For the entire next year, Linda could only see shades of light and dark.

As her symptoms became more apparent and her episodes more frequent, Linda needed more answers. She visited an internist and finally received an explanation for the disturbing symptoms that would change her life moving forward: She had MS.

Linda had to keep moving forward, despite her symptoms, for her kids and her job. “I was told I would have to quit my job as a stockbroker due to the stress associated,” she says. “That was not an option as I was a single mother with two daughters to raise. It became clear to me that I would have to be my own advocate.”

Linda continued researching to learn about MS and how to help manage her symptoms. She learned that when she got more sleep, she experienced less debilitating episodes and was able to better handle her symptoms. In those times when she’d have an episode, sleep was her “elixir” that allowed her to reset.

Eventually, while working on a project, Linda pushed past her typical warning signs. “I had pushed myself too hard and didn’t back off,” she says. “I woke up one morning paralyzed from the neck down so I couldn’t even roll over. I couldn’t go to the bathroom by myself…I never could walk without a cane again.”

After living 20 years with relapsing-remitting MS (RRMS), Linda crossed into secondary progressive MS (SPMS). She lost all feeling in her abdomen and fingers and couldn’t stand long enough to cook family meals without lying down to take breaks.

But most significantly, her eyesight continued deteriorating. “I started losing my eyesight where my peripheral vision kept narrowing to [the point that] I was down to one inch vertically,” she says. “So I had to close one eye to see. And then if I even slightly turned my head, I went into kaleidoscope vision again and lost my eyesight.”

Just as she had all along, Linda dove into looking at different treatment options.

The Power of Research

A segment on the “Today” show inspired her to seek out new options for treating her MS with medication. She sought help from her doctor and they discussed the options, settling on a new medication to try. She took her first pill the next morning and began to see improvement.

“My walking had gotten so bad, I had to use strength in my arm with a walker to take even a few steps,” she recalls. But soon, Linda went with her husband and a couple of neighbor children for ice cream. For the first time in several years, she was able to walk down the garage stairs to the car without anything but her cane.

Seeing the connection between stories and diseases has reinforced Linda’s belief in the power of community and research. “I think you can learn by what other people have, what may have worked for them,” she says. “It all interfaces. Some things you do to help one disease can interface with others.”

These days, life feels a little easier for Linda. Now retired, she doesn’t have to keep a schedule. She is grateful to have her eyesight and read books. She can use the restroom on her own. While her walking is limited and she can’t stand for long periods of time, Linda has an electric scooter and walkers on each floor of her house to help her move around. “I call them my turbo walkers, but they’re very functional,” she says. “They give me stability. I don’t use them all the time. I can still walk a little bit.”

For support, Linda turns to people in her life and to online communities for others affected by the disease. She regularly communicates with other people with MS online, where they share challenges and brainstorm ways to handle them.

Linda continues to support research and imagines a life without brain disease: “It would be like night and day. I mean, I’ve lived with MS for 38 years and it would have been so much easier if I didn’t have a brain disease to deal with. It would be tremendous to be able to wear heels, to be able to walk… Just day-to-day, it would be so great to return to my pre-MS years.”

Twenty years ago, there were few, if any, medications to effectively treat MS. But since then, treatment options have improved for patients with this disease. There are currently six oral and 12 injectable medications that work against MS; however, despite the availability of effective medications, there is still no cure. We need additional research to make this a disease of the past.