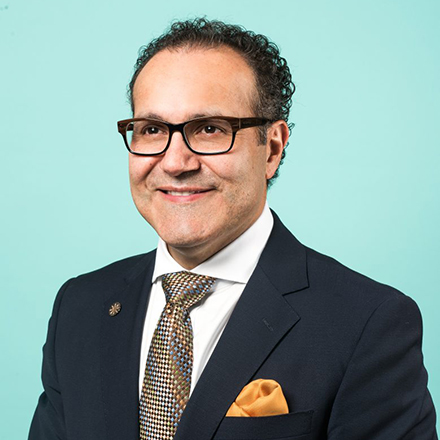 Dr. Alfredo Quiñones-Hinojosa, also known as “Dr. Q”, serves as Chairman of the Department of Neurological Surgery and is the Dean of Research. He leads the Brain Tumor Stem Cell Laboratory at Mayo Clinic Florida, where he has been recognized with the distinction of the William J. and Charles H. Mayo Endowed Professorship.

Dr. Quiñones-Hinojosa’s practice focuses on the treatment of primary and metastatic brain tumors. He is a world-renowned leader in brain mapping techniques utilized to safely remove tumors close to eloquent brain regions and in minimally invasive endoscopic approaches required to operate on difficult-toreach skull base tumors. Dr. Q uses his laboratory as an extension of the operating room, and together with his team of scientists, they look to better understand and elucidate multiple molecular drivers of brain cancer migration, invasion, metabolism, and determinants of the tumor microenvironment. He also performs translational and clinical research. For instance, Dr. Quiñones-Hinojosa team has one active clinical human protocol to maximize the extent of resection in the operating room and several approved protocols to conduct our work in rodents, primates, and humans. One of the other current clinical projects involves using mesenchymal stem cells for the treatment of glioblastoma.

Dr. Quiñones-Hinojosa has written seven books about brain cancer and neurosurgery that have been translated to multiple languages. He has published over 500 peer-reviewed publications and currently holds an H-index of 80. His research is supported by the National Institute of Health (NIH), where he also serves as reviewer in many NIH study sections such as the Clinical Neuroimmunology and Brain Tumors (CNBT).

Over the last 15 years, Dr. Quiñones-Hinojosa has mentored more than 300 post-graduate students and neurosurgery residents, who are currently working in prestigious institutions of the United States such as Harvard, Johns Hopkins, MD Anderson, UCSF, as well as other institutions around the world in Mexico, Spain, Panama, England, and many others.

Dr. Quiñones-Hinojosa has received many honors and awards in recognition of his work. He has been named one of the 100 most influential Hispanics in 2008, as the recipient of the Gary Lichtenstein Humanitarian Award and Neurosurgeon of the Year in 2014, and one of Mexico’s most brilliant minds in the world by Forbes Magazine in 2015. Dr. Quiñones-Hinojosa is the recipient of the prestigious Charles B. Wilson Award granted by the Congress of Neurological Surgeons (CNS) in 2021 due to his meritorious career in neurosurgery, and also serves as the current International Vice-chair of the AANS/CNS Tumor Section. Dr. Quiñones-Hinojosa has also received multiple honoris causa degrees from several institutions around the globe, including Southern Vermont College, Lackawanna College, Dominican University, University of Notre Dame, Loyola University, and others countries like Mexico, Ecuador, and Peru. Apart from his clinical and research activities. He is the co-founder and president of the non-profit organization Mission:BRAIN (Bridging Resources and Advancing International Neurosurgery; www.missionbrain.org) and a member of the executive committee of Voices Against Brain Cancer. He has also founded three companies to extend the reach of his discoveries to more patients and has filed more than 25 patents with the same purpose.

Dr. Quiñones-Hinojosa has published his inspirational autobiography, “Becoming Dr. Q,” which verses on his journey from a migrant farmworker to a neurosurgeon. Part of Dr. Quiñones-Hinojosa life was included in the 2009 Peabody Award-winning ABC TV Series “Hopkins” and the 2021 EMMY/ BAFTA Award-winning show “The Surgeons Cut”, produced by the BBC/Netflix. Disney and Plan B Entertainment productions announced that his inspirational life story will also be featured in theaters. For more information please visit a) www.doctorqmd.com b) https://www.mayoclinic.org/biographies/quinones-hinojosa-alfredo-m-d/bio-20238939