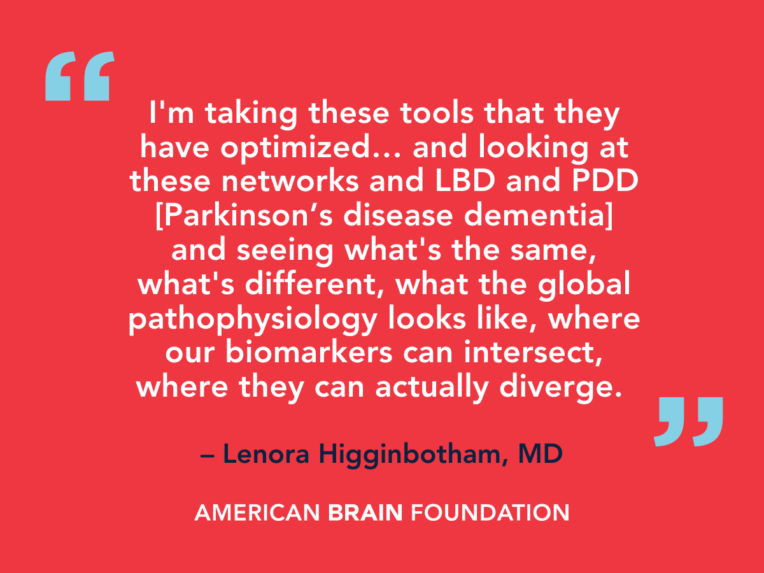 Lewy body dementia (LBD) is a brain disease that causes a progressive decline in neurological function. It is the second most common type of dementia after Alzheimer’s disease. However there isn’t a diagnostic test to definitively identify LBD during an individual’s lifetime. So it’s something doctors easily miss or misdiagnose. We know little about the disease at a molecular level. Currently, the disease can only be diagnosed with certainty through a brain autopsy after death. But Next Generation Research Grant recipient Lenora Higginbotham, MD, hopes to change the future of Lewy body dementia diagnosis with her research.

Now a Senior Associate in Neurology at Emory University, Dr. Higginbotham is the recipient of a 2020 American Brain Foundation Next Generation Research Grant. In collaboration with the American Academy of Neurology, the American Brain Foundation offers grants to invest in new generations of clinical neuroscientists. Read on to learn about Dr. Higginbotham’s research and the impact discovering a diagnostic tool for LBD would have. We’ll also discuss how receiving a Next Generation Research Grant is helping to fuel her career.

Dr. Higginbotham is committed to clinical research in Lewy body diseases. These are degenerative diseases including dementia with Lewy bodies, Alzheimer’s, and Parkinson’s that all accumulate proteins in the brain. Her interest in neurology began shortly after she started medical school when her grandmother was diagnosed with Parkinson’s disease. The lab she joined introduced her not only to tools and data sets for researching Alzheimer’s disease but also to her mentors, Allan Levy, MD, PhD, and Nicholas Seyfried, PhD.

When she first worked in the lab during medical school, Dr. Higginbotham learned about using proteomics and mass spectrometry, both analytical tools, to compare the protein levels in Alzheimer’s disease brain tissue with those in healthy brain tissue. These tools group different proteins together and produce organized data sets. The tools help researchers identify similarities in the brain, blood, and cerebrospinal fluid.

Her goal is to identify a biomarker, or measurable substance, that will indicate LBD and provide a definitive diagnosis. Finding a biomarker will also help doctors apply appropriate treatment and monitor the disease’s progression. She has teamed up with a big proteomics lab responsible for Alzheimer’s research and is using their advanced techniques for detecting and analyzing protein levels to look at Lewy body dementia.

“I’m taking these tools that they have optimized… and looking at these networks and LBD and PDD [Parkinson’s disease dementia] and seeing what’s the same, what’s different, what the global pathophysiology looks like, where our biomarkers can intersect, where they can actually diverge,” explains Dr. Higginbotham.

Discovering LBD biomarkers would have significant benefits. Once it’s possible to identify with certainty which people have the disease, drawing comparisons between their profiles can ultimately lead to improved diagnosis, treatment, and ways to study the effectiveness of treatment.

“We have a diagnostic gap with Lewy body dementia,” says Dr. Higginbotham. “Having something that’s really accessible and can distinguish it easily and cost-effectively from Alzheimer’s would be really, really helpful.”

There is currently no treatment or therapeutics for LBD, especially for the cognitive symptoms that can often be so debilitating. “The big lovely idea, which I think is very reachable, is that we want this to translate into something for treatment,” says Dr. Higginbotham. By identifying biomarkers in the brain and diagnosing Lewy body dementia, doctors will be able to better develop individualized treatments, monitor disease progression, and determine the brain’s response to treatment.

The Ripple Effect of an LBD Diagnostic Test

Because of the similarities between them, research for other neurodegenerative diseases like Alzheimer’s and Parkinson’s can help researchers answer questions and find the biomarkers that distinguish these brain diseases. In this way, Dr. Higginbotham’s research has the potential to impact treatment and diagnosis for degenerative brain diseases beyond Lewy body dementia.

“There’s this growing knowledge that all of these neurodegenerative diseases actually overlap in pathophysiology a whole lot,” says Dr. Higginbotham. “And what we’re really trying to do with these big, global pictures of proteins is get not only at disease-level differences but also individual-level differences …that we can then use to, just frankly, individualize treatment for patients.”

While there is overlap between brain diseases, there are also differences among individual patients. As research continues to organize these complex data sets, Dr. Higginbotham believes they’ll see more and more subtypes. “We just want to make sure we get a diversity of people in research and a diversity of people who are engaged in research… to be able to really work toward defining all that overlap and all that individuality,” she says.

The Value of Early Career Grants

An opportunity like the Next Generation Research Grant uniquely supports researchers in the early part of their careers, helping grow promising ideas into groundbreaking data. “As physicians, clinicians, scientists, to do the actual research part, you’re expected to fund your salary. And a lot of times that can be difficult to do when you’re first coming out,” says Dr. Higginbotham. “This is why career development awards, like this grant from the American Academy of Neurology and the American Brain Foundation, are so important for people early in their careers.”

These initial research projects can also spark future initiatives. “I’ve already been able to generate a pilot data set and apply for a longer-term funding,” she says. “I wouldn’t have been able to have that protected research time without some sort of career development kickstart like the grants.”

At the American Brain Foundation, we recognize the overlap between brain diseases and the interconnections within the whole brain. We firmly believe that if we cure one brain disease, we can cure many. Learn more about our researchers’ efforts to discover diagnostic tests for neurodegenerative diseases like Alzheimer’s.