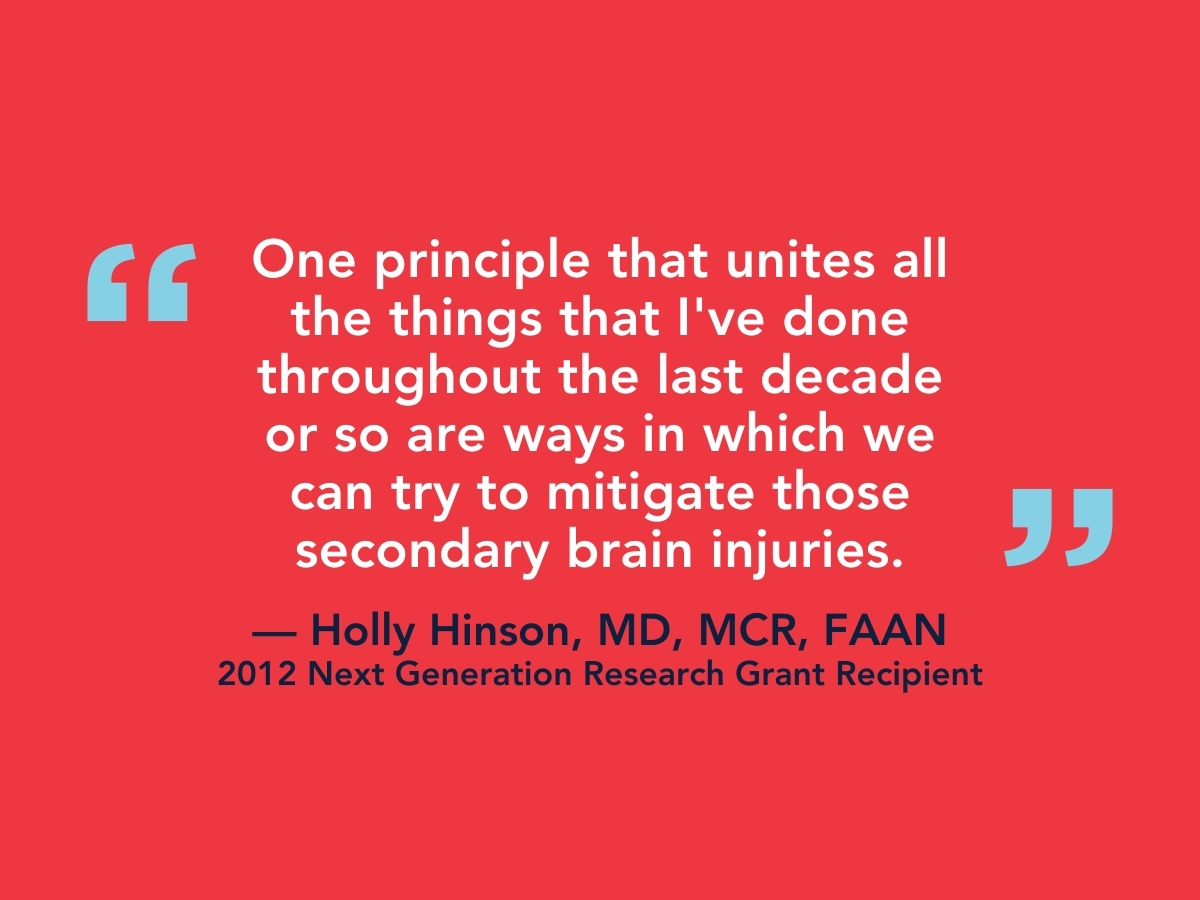 Some patients with a severe traumatic brain injury (TBI) will develop a very curious syndrome while being treated in the intensive care unit (ICU). Very little was known about this syndrome when Holly Hinson, MD, MCR, FAAN, received a 2012 American Brain Foundation Next Generation Research Grant to study it. “We were even still arguing about what to call it at the time,” she says.

When patients develop this syndrome, their vital signs go haywire after being stable. “Their heart rates will become very high, their breathing pattern will become abnormal and very rapid, and sometimes they’ll even sweat or experience changes in their pupils,” says Dr. Hinson, an associate professor of neurology at Oregon Health & Science University.

Patients who experience that syndrome, now called paroxysmal sympathetic hyperactivity or sympathetic storming, tend to stay in the ICU longer and do worse once they leave the hospital. Dr. Hinson wanted to figure out a way to identify patients who were at a greater risk of developing the syndrome.

In 2012, doctors began to use a scale to describe the severity of the syndrome, and Dr. Hinson’s project took that scale and applied it systematically to all the patients with a TBI in the ICU. That study found that patients who developed a fever shortly after their injury, specifically in the first 48 hours, were at a higher risk for developing the syndrome.

The fever insight came directly from research supported by the Next Generation grant. That project also gave Dr. Hinson a patient population she could use to study related questions about the syndrome.

On a more personal level, the grant supported Dr. Hinson as she pursued a master’s degree in clinical research. “It allowed me to take some coursework that gave me a more solid foundation in things like biostatistics and clinical trial design, which has served me immeasurably in my career in clinical research,” she says.

Of course, Dr. Hinson’s research expanded from studying TBIs and fever to studying TBIs and inflammation. She began looking for fluid-based biomarkers, such as proteins in the blood that can be easily measured. Biomarkers have uses for diagnosis as well as treatment.

In Dr. Hinson’s case, she’s now using these biomarkers to build how patients might fare after a brain injury. “The thinking being that if you’re able to accurately predict these very important clinical events before they occur, you can change the management for that patient,” she says.

For example, take the case of hemorrhagic contusions, or brain bruises, following a TBI. If you can predict a patient is at higher risk of expanding brain bruises, you’ll ensure they get followup CT scans. On the other hand, if you know a patient has a lower risk, you can spare them extra procedures.

This work reaches beyond brain injuries. Dr. Hinson says it’s very relevant to stroke, particularly hemorrhagic stroke. She applied some of these concepts to patients undergoing cancer treatment who can have some complications involving the brain. “The tool that’s so powerful here is not only the measurement of specific biomarkers, but also this concept of building predictive models and using those models to really inform our decision-making in the intensive care unit,” she says.

Dr. Hinson sees herself as a physician, a scientist and a mentor. “It’s so critical to bring the next generation of physician scientists into the fold, and to teach them, not only correct techniques and the ways in which to conduct science to produce the highest quality evidence so we can really better care for our patients, but also really to foster and generate and nurture those physician scientists as people.”

In 2017, Dr. Hinson proposed an LGBTQI section at the American Academy of Neurology (AAN) and started the section in 2018. It now has more than 200 members. “Personally, as an out, queer, woman scientist, I felt like I was particularly in a privileged place to be able to start a section that would communicate the AAN’s openness to folks with perhaps not the most traditional identities, that maybe have not been historically represented within neurology,” she says.

The section doesn’t just supports those members. It also provides cultural competency education to all AAN members. It helps doctors better take care of patients who identify as sexual and gender minorities. This is important, Dr. Hinson says, because being a member of the LGBTQI community impacts brain disease in some very specific ways.

For example, using certain gender-affirming hormones can interact with antiepileptic drugs. “To know that, and to be able to navigate that in the clinical scenario, will improve the quality of the care that we deliver to our patients,” Dr. Hinson says.

Dr. Hinson says support she received from AAN and the American Brain Foundation motivates her to give back. “I had this incredible investment, not only in my science, but in me as a physician scientist,” she says, “That investment in the next generation pays off beyond.”