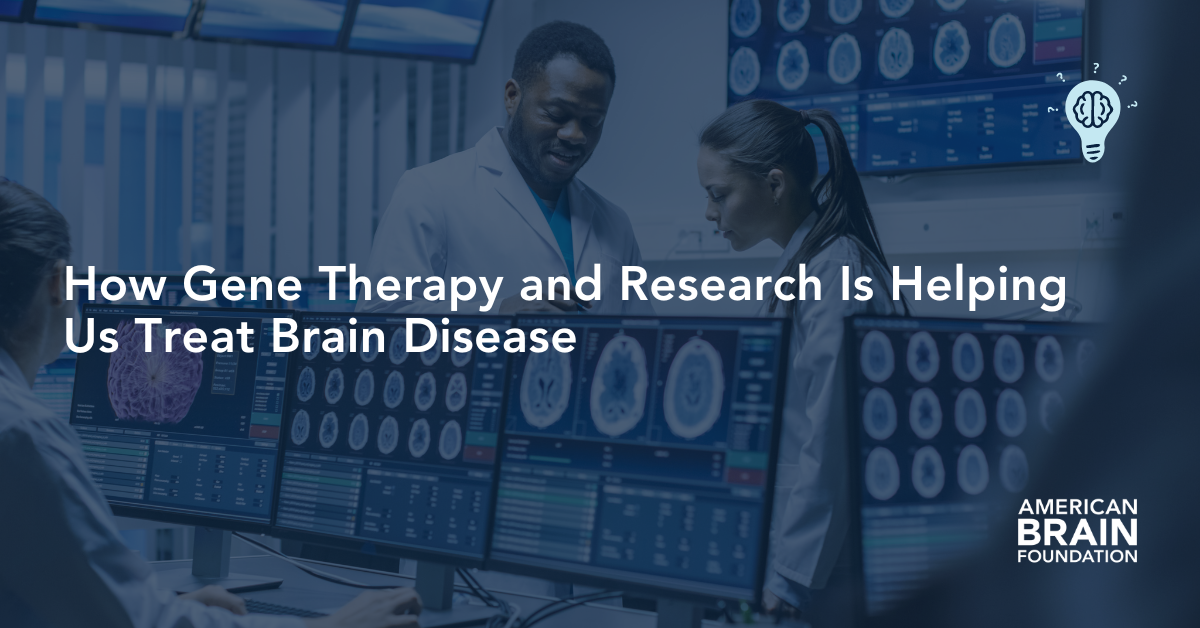 Research breakthroughs in recent decades have shown that gene therapy has the potential to be an effective treatment and diagnostic tool for various brain diseases. While there are still clear limitations and challenges to gene therapy for brain disease, genetic research has enabled us to develop deeper understandings of disease formation and progression and risk factors for multiple diseases and disorders. Below we discuss how some of these discoveries will help us develop better treatments for brain disease in the future.

How does gene therapy for brain disease work?

While brain diseases have many different causes, including one’s environment and complex biological factors, some are caused by a genetic mutation. When a gene is abnormal in some way, it affects a person’s normal bodily functions and development. By identifying specific gene mutations through genetic testing, researchers have been able to pinpoint the mutations responsible for many brain diseases.

Gene therapy works to correct a genetic mutation. A delivery vehicle, typically a harmless virus called a viral vector, provides the normal version of the mutated gene, which then over time distributes throughout the brain. While researchers have had some success using gene therapy to treat neurodegenerative diseases in rodents, it’s much more complex to apply the same treatment to humans. One challenge is the blood-brain barrier. This barrier is a protective mechanism around the brain. To deliver the normal version of a gene, a viral vector that is injected in the blood has to be able to cross the blood-brain barrier and reach different parts of the brain.

While it’s not quite the same as gene therapy, identifying the specific genes responsible for certain brain diseases has also laid the groundwork for advanced diagnosis and treatment options. When we know which genes correspond to specific diseases, doctors can make more accurate diagnoses and use more effective, targeted treatments. Gene testing can be especially helpful when diagnosing rare genetic brain diseases with presenting symptoms that may closely overlap with other more common disorders.

Currently, no—but researchers are trying to develop more effective treatments that target DNA and specific gene mutations. Genetic research and tools like genetic testing may help in the development of new treatments for brain disease, even if those treatments aren’t yet complete cures. It is a victory when gene therapy leads to a significant improvement in brain disease symptoms or a clearer understanding of the mechanisms through which a disease impacts brain function.

Breakthroughs in gene therapy help researchers learn more about how different delivery vehicles work, how to adjust treatments to make them safer and more affordable, and how to apply these findings to other diseases. Let’s take a closer look at some of the ways genetic research is making progress in brain disease diagnosis and treatment.

Genetic Research Leading to the Development of New Medications

Genetic research can lead to a greater understanding of why a disease develops and how it progresses—and in turn, how to more effectively treat it. Since 1993, scientists have known the genetic cause of Huntington’s disease—a hereditary (inherited) neurodegenerative brain disease that interferes with thinking, behavior, and movement—but there have been no treatments developed specifically targeting this genetic basis for the disease.

Now, gene therapy is offering hope that new drug treatments could slow or stop the effects of mutated genes in diseases like Huntington’s. The development of drugs called antisense oligonucleotides (ASOs) for Huntington’s disease is one example of how research findings can lead to new drug therapies.

ASO drugs are pieces of DNA or RNA that link to the disease-causing proteins produced by mutated genes. They can then stop accumulation of these harmful proteins or can replace missing ones in order to rebalance protein levels. While ASO drugs are invasive and not yet widely used, they represent an important step toward improved treatments for Huntington’s disease—and perhaps other brain diseases in the future.

The disease involves a deficiency that affects the body’s ability to make dopamine and serotonin, which are neurotransmitters or “messengers” in the brain. When this happens, it can cause developmental delays, behavioral problems, and movement issues.

After receiving gene therapy directly to the midbrain, children in the clinical trial saw improvement in symptoms like eye spasms, sleep disturbances, and issues with head control. With the success of this trial, researchers are hopeful that brain-delivered gene therapy could be used to treat other more common neurodegenerative diseases like Alzheimer’s and Parkinson’s disease.

The connection between gene mutations and specific brain diseases can help with earlier diagnosis and treatment. Genetic testing, often done through a blood sample, can detect any abnormal or mutated genes. This information can help doctors identify whether a person has a specific disease, is at risk to develop a disease, or is a carrier of a gene mutation they could pass along to their children.

Gene mutations can either cause a condition or increase a person’s risk of developing it, and often multiple genes can play a role in a specific brain disease. There are also different types of genetic testing: diagnostic, when someone has symptoms of a disorder, and presymptomatic, when a person doesn’t have symptoms but has an increased risk based on family history or environmental factors.

As researchers learn more about major and minor gene mutations and which ones may cause certain disorders, genetic testing could become a more helpful tool. Because genes are passed down through family members, the findings of a genetic test can have an impact beyond the person who undergoes testing. It’s also crucial to consider how the results of genetic testing may impact a person’s life and inform potential treatment options. While testing can provide answers, it can also open up more questions.

These three areas—development of new medications, new treatment methods, and genetic testing—are evidence that genetic research has the potential to revolutionize the the way we understand, diagnose, and treat many different brain diseases. This type of research helps make progress toward more effective treatments for all brain diseases. Because the brain is interconnected, as we discover more about genetic mutations and gene therapy for one disease, we will be able to apply these learnings to help treat other brain diseases.