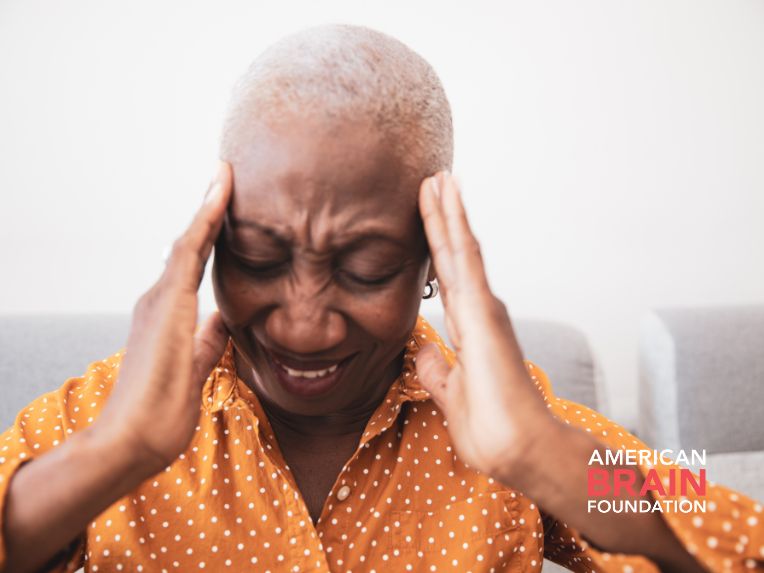 Learn more about epilepsy and its connections with migraine.

At the American Brain Foundation, we support whole-brain research across a broad spectrum of brain diseases and disorders. We know that different parts of the brain are interconnected and discoveries in one area of brain disease research will help us unlock important insights into others.

In honor of Epilepsy Awareness Month, we are breaking down some of the connections between epilepsy and a common co-occuring disease: migraine. Epilepsy and migraine are both episodic brain disorders with some similar characteristics, including headache pain and a pre-attack phase called aura. Below we discuss the overlapping characteristics of these two diseases, common treatment options, and the importance of research in expanding our understanding of both.

Is there a connection between migraine and epilepsy?

Epilepsy is a chronic disorder that disrupts nerve cell activity in the brain and causes recurrent seizures without a clear trigger. Only 0.5% of people have epilepsy. Because the cause of epileptic seizures is not typically apparent, doctors cannot make a diagnosis until after a person has had two or more seizures occurring at least 24 hours apart without a known medical cause.

There are different types of seizure disorders associated with epilepsy, both genetic and non-genetic. Seizures may be due to an abnormality or change in the brain or an imbalance in nerve-signaling chemicals. They can also occur in connection with another illness or infection, brain damage, brain tumor, or abnormal brain development.

According to the Epilepsy Foundation, people with epilepsy are twice as likely to have migraine headaches. Migraine is a neurological disease that affects 12% of the global population. The most common migraine symptom is headache, but it can also produce a variety of other symptoms such as nausea, light and sound sensitivity, dizziness, and sensory disturbances (called aura).

People with migraine also have a greater chance of having epilepsy, though they often do not develop epilepsy without another risk factor, such as head injury.

How are migraine and epilepsy alike?

Migraine and epilepsy are both episodic disorders, meaning they are marked by attacks or sudden onset of symptoms—sometimes in response to environmental or biological triggers—followed by periods of recovery in which people can be symptom-free. They can also share some symptoms, such as headache, nausea, and numbness in the face or arms.

Both epilepsy and migraine may involve a pre-symptom period called aura, which can occur before a migraine attack or before an epileptic seizure. Aura is characterized by a series of sensory disturbances—such as seeing sparks, bright lights, and zig zags—numbness in one area of the body, or an inability to speak clearly.

About 25 to 30% of people with migraine experience aura. According to one study, 58% of people with focal epilepsy (seizures begin in one part of the brain) and 13% of people with generalized epilepsy (seizures begin in both sides of the brain) experience aura. The aura symptoms a person with epilepsy experiences can indicate where seizures happen in their brain. Often in the case of epilepsy, the terms “aura” and “simple partial seizure” are used interchangeably because aura occurs as part of a partial (focal) seizure in which a person remains conscious.

Epilepsy and migraine can also have common triggers, including stress, lack of sleep, hormone changes during menstruation, alcohol, and taking too much medication or skipping a dose.

Research shows epilepsy and migraine may share certain genetic or environmental risk factors and similar underlying mechanisms, such as hyperexcitability in the brain. A deeper understanding of these common characteristics could lead to new insights and treatments for both conditions.

Can epilepsy cause migraine attacks?

Epilepsy doesn’t cause migraine attacks, but it can cause headaches. While not all headaches are migraine, headache can be a pre- or post-seizure symptom. About 45% of people with epilepsy experience a headache after seizure activity, or what is known as a postictal headache. Postictal headaches can range from mild to severe and can last from 6 to 24 hours, or even longer.

There is no clear evidence that migraines cause seizures, but headaches may occur before a seizure. Known as pre-ictal headaches, these can be brief episodes of throbbing, steady, or sharp pain. About 20% of people who have seizures that are difficult to control experience pre-ictal headaches. However, seizures may affect a person’s memory of a pre-ictal headache, so it’s possible they are underreported.

In rare cases, headache can actually be a seizure symptom. There are also rare instances where migraine attacks may trigger seizures—a condition referred to as migralepsy. However, there is not yet a clear consensus among researchers about this condition, and more studies are needed. Part of the difficulty is that the difference between postictal headache and migraine—and the difference between an occipital seizure and migraine with aura—can be hard to distinguish.

Can you treat migraine and epilepsy together?

It’s also possible to treat epilepsy and migraine by using different medications to treat each disease separately. Your doctor can help you find the right combination and ensure your medications don’t negatively interact with one another or conflict with other medical conditions.

Neuromodulation devices use electrical currents or magnets to increase or decrease brain activity and can be used to treat both migraine and seizures. Some neuromodulation devices are portable, while others require surgical placement. In some cases, doctors may recommend  brain surgery for epilepsy when someone’s seizures cannot be controlled with medication. About 70% of people with epilepsy can control their seizures with medication and/or surgical intervention.

If you have migraine or epilepsy, it’s important to consult your doctor to discuss the best treatment plan for you and your symptoms. Because migraine and epilepsy are connected and share similar characteristics, there is hope that research into diagnosis, treatments, and prevention options for one will help advance our understanding of both brain diseases.

The American Brain Foundation was founded to bring researchers and donors together in the fight against brain disease. Learn more about epilepsy, migraine and other brain diseases or make a gift to support brain disease research.