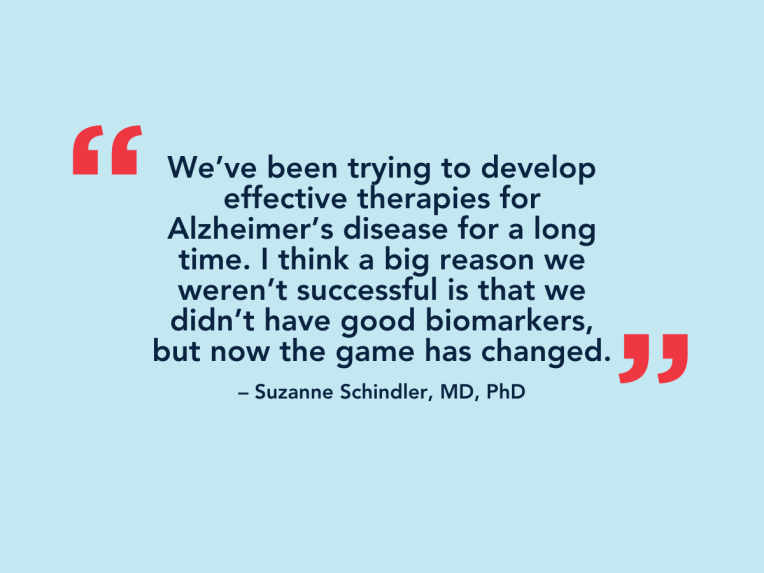 From studying the brains of mice to identifying biological measures that can indicate a person’s risk for developing Alzheimer’s, Suzanne Schindler, MD, PhD, has paved a unique research career path. In 2012, she received a Next Generation Research Grant from the American Brain Foundation in collaboration with the American Academy of Neurology for a Clinical Research Training Fellowship in Alzheimer’s and Dementia Research. This grant helped her transition from a career as a clinician to a clinical scientist and make the leap to studying those biological measures, called biomarkers. With this, she began studying the potential of a diagnostic test for Alzheimer’s using these biomarkers.

“Biomarkers are just really an incredible tool. We’ve been trying to develop effective therapies for Alzheimer’s disease for a long time,” says Dr. Schindler, neurologist and assistant professor of neurology at Washington University School of Medicine in St. Louis. “I think a big reason we weren’t successful is we didn’t have good biomarkers, but now, I think we do…The game has changed.”

Shining a Light on Neurological Diseases

For most of her PhD work, Dr. Schindler studied mouse models of Alzheimer’s disease. Later, she returned to the lab to better understand why neurological diseases often start in one area of the brain and then spread. But it was difficult to model that scenario in a mouse’s brain.

The Next Generation Research Grant funded Dr. Schindler’s work to develop a system that turned on specific genes in a mouse’s brain by shining a light on them. This system later served as a starting point for other researchers. In 2020, research that built on Dr. Schindler’s initial project was published, providing new insights into biological function and controlling gene expression.

As Dr. Schindler proceeded in her fellowship, she realized that she wanted to do research that was more closely related to the patient care she was providing in the clinic. She became passionate about discovering ways to identify indicators of Alzheimer’s disease by analyzing blood or cerebrospinal fluid.

Blood Tests for Alzheimer’s: From Bench to Bedside

Dr. Schindler’s education, clinical work, and Next Generation Research Grant project served as a springboard for her career. After the NGRG award, she received a National Institutes of Health (NIH) Career Development (K) Award to expand her research training. “I had to learn statistics and how to do clinical research, and started studying CSF [cerebrospinal fluid] biomarkers of Alzheimer’s disease,” she says.

Dr. Schindler also continued studying blood-based biomarkers as well, and in 2019, she co-authored a paper on a blood test for Alzheimer’s disease. Following that publication, the test became the first commercially available blood test to diagnose Alzheimer’s. In the past, Alzheimer’s could only be diagnosed with invasive procedures like a lumbar puncture, in which a needle is inserted into the spinal canal to collect the fluid that surrounds the brain.

This research in the lab has also translated to patient care in the clinic. “As a dementia doctor, I just ordered this [blood test] on a patient a couple of weeks ago. And I called the patient with the results last week,” she says. “That’s bench to bedside.”

Informing The Future of Alzheimer’s Research

Biomarkers give clues to the biology of Alzheimer’s disease and help with clinical diagnosis. “It’s very common that I have patients that have not just one problem, but multiple problems,” says Dr. Schindler. “Sometimes it’s hard to figure out whether their memory and thinking problems are due to Alzheimer’s or something else, and so the objective test is very helpful.”

Having a blood test for Alzheimer’s is also important for drug development and clinical trials. Blood tests allow researchers to identify people with Alzheimer’s brain changes at least a decade before they’d likely develop symptoms. They can then enroll them in a clinical trial and screen for people who would most benefit from the trial. “You want to make sure that they’re at risk for having Alzheimer disease,” says Dr. Schindler. A future preventive drug might have side effects and be expensive. So it’s important that people involved in clinical trials are the ones who could most benefit.

Longer term, she thinks it’s possible that a blood test for Alzheimer’s could become a standard health screening at a certain age, and if the results indicate a risk, the person could receive a drug to prevent or slow down symptom onset.

How the Next Generation Research Grant Program Fueled Her Career

Dr. Schindler credits the American Brain Foundation’s Next Generation Research Grant program with helping her make the leap from clinician to clinician scientist. Its role in her early years as a researcher was crucial to getting her to where she is today. The grant allows early-career researchers to develop a specialized area of study in brain disease research according to their interests, rather than focus on seeing patients or working on predetermined projects. “You really need that time to do some research and think about what you really want to study. And without an award like that, you just can’t do it,” she says.

As her interests grew, the flexibility of the grant allowed her to change paths and explore clinical research. “I haven’t looked back,” Dr. Schindler says. “But in a lot of ways, [without the grant,] that would be pretty unusual for someone to be able to make such a big career detour… I kind of ended up in a different place than I was expecting—but in a good place. I’m very happy that I did it.”