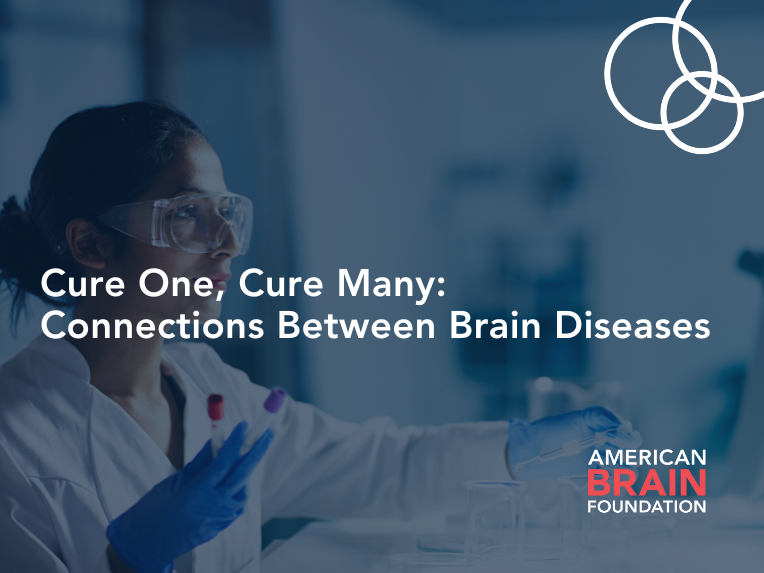 At the American Brain Foundation, our vision of Cure One, Cure Many drives our commitment to brain disease research.

The American Brain Foundation funds research across the entire spectrum of brain diseases because we know the brain is interconnected and there are common threads that link many different diseases. If we find a cure for one disease, it will lead to cures for other diseases.

This connection between brain diseases was the focus of our recent Cure One, Cure Many webinar. Our guest, Frances Jensen, MD, FACP, FAAN, spoke about the impact of brain research and opportunities for future research. Dr. Jensen is a professor of neurology and chairman of neurology at the Perelman School of Medicine at the University of Pennsylvania, as well as co-director of the Penn Translational Neuroscience Center. She is also the current president of the American Neurological Association and member of the American Brain Foundation board of directors.

A Critical Moment in Research

Right now is a critical moment in the field of neurology and neuroscience. To provide some context, Dr. Jensen points out how many incredible breakthroughs have happened in the past 10 years, including the development of treatments to reverse strokes in progress, epilepsy drugs, immunotherapies, new biomarkers for a range of diseases, and gene therapy. “It’s extraordinary,” she says. “We can only hope for more, and I truly believe we’re at an accelerative moment.”

Dr. Jensen believes “new neurology” is the fastest-moving area of biomedicine and clinical medicine. In recent years we have seen clinical diagnostic innovations and the introduction of highly sophisticated technology built upon a foundation of research. These advances are allowing researchers to observe the effects of treatment and disease progression in humans, not just animal models and cell cultures.

This progress is important because the prevalence of neurologic and other brain-related disorders is increasing across our lifespan. The burden of brain disease is significant, both in its emotional toll on the lives and families of people affected and as measured in disability-adjusted life years and yearly economic cost. This impact is growing, especially with age-related neurodegenerative disorders such as Alzheimer’s disease and other dementias.

As researchers look deeper into the mechanisms of brain disease, possible genetic factors, better imaging and diagnostic technology, and other areas, we are increasingly recognizing how many brain diseases are actually related. Dr. Jensen suggests that rather than identifying diseases by individual names, in the future, brain diseases could be grouped or classified by their similar characteristics, such as “channelopathies,” “disorders of metabolism,” or “protein accumulation disorders.”

This connection between diseases is igniting an industry-wide effort to share research and the results of clinical trials. “I think we are beginning to see this kind of acceleration because people are communicating and scientists are sharing information, and they’re not only focusing on a single disease,” she says. “We’re able to use the very same metrics and we can gather data across different types of diseases and mine the data for similarities.”

Using Imaging to Understand the Brain

Dr. Jensen points specifically to the importance of imaging technology in advancing our understanding of the brain and how its different parts and functions are connected. When researchers can more accurately map neural pathways and networks in the brain, they can better understand how diseases affect specific areas.

As an example, she showed how imaging is used in epilepsy research to “track” a seizure’s progress in the brain. The hope is that if scientists can discover the source of seizures and how they move through the brain, we can learn how to regulate the brain’s electrical signals better and enable it to function normally again. This knowledge could potentially apply to other circuit disorders like Parkinson’s disease and tremor. Related research is looking at using programmable, interactive electrodes and other non-invasive ways to stimulate specific areas of the brain.

Researchers are also starting to use artificial intelligence and other tools to analyze brain images and identify different markers of disease or potential genetic patterns. In some cases, researchers are pairing brain imaging with blood samples to better understand conditions like traumatic brain injury (TBI) and Alzheimer’s disease. When taken in conjunction with brain imaging that shows the presence of TBI or Alzheimer’s, blood tests may help to identify biomarkers that can aid in early diagnosis or assessment of the severity of a particular disease or condition.

“We’re getting to that level of resolution, and it’s not just movement disorders, Parkinson’s, Lewy body, Alzheimer’s, and TBI,” Dr. Jensen says. “This could be used in epilepsy, in migraine—we don’t know yet, but this is, again, this idea that you can apply the same kind of method to multiple diseases.”

Research benefits when people studying brain function (or dysfunction) as a whole aren’t constrained to seeing it through the lens of one disease. Dr. Jensen discussed how focusing on similar characteristics across different diseases can help researchers unlock insights about potential treatments—such as the use of antibodies to reduce abnormal protein deposits in brain diseases like Parkinson’s, Lewy body dementia, and other dementias.

“You can see these are different diseases, but [treatments arose out of] the same idea—that you need to use an antibody to take away an abnormal protein,” she says. “Again, this kind of science has come out of the Cure One, Cure Many mindset.”

Breakthroughs in newer areas—such as stem cell transplants to treat Parkinson’s disease—offer another example of how learnings from one area can apply to another. “We’re better [able] to understand how to make stem cells work by having seen how successful, or at least partially successful, other treatment methods [like dopamine supplementation or deep brain stimulation] have been,” Dr. Jensen says.

Dr. Jensen does note one challenge to this more interdisciplinary approach to research: When studies are not tied to one specific disease, it can be difficult to get funding. “This is like 21st century research funding,” she says. “It’s not like the old way of doing things. It doesn’t fit traditional funding mechanisms.”

She recognizes that the American Brain Foundation is uniquely positioned to help move the research cycle from its early stages to clinical settings, practice, and beyond. “I think [the Foundation] has the opportunity to take advantage of discoveries that are emerging in one field and help us expand and amplify the importance of those findings,” she says.

What is the impact of expanding and amplifying research? Large-scale population-based and lifespan research has already provided important insights into different risk factors like hypertension, obesity, and diabetes as well as public health disparities. All of these findings help scientists understand what makes someone more or less likely to develop a brain disease, which in turn can help improve early detection, diagnosis, and treatments.

The American Brain Foundation encourages collaboration and research in more general areas that could have applications across diseases. “One of the most common and easy ways to have these collaborations is in the training of young investigators—to help them develop this kind of mindset of being more open-minded outside of their single silo,” says Dr. Jensen.

In addition to supporting up-and-coming researchers, the American Brain Foundation partners with many different organizations. For example, the Foundation recently formed a research initiative focused on neuroinflammation, bringing together many associations focused on single diseases to collaborate on research. As another example, the Alzheimer’s Association and the Michael J. Fox Foundation support the American Brain Foundation’s recent research grant awarded to a team of scientists to accelerate progress in the diagnosis of Lewy body dementia.

Because so many brain diseases share common mechanisms, a breakthrough for one disease will lead to breakthroughs for many others. While brain disease research is moving quickly and changing rapidly, researchers need continued funding to maintain and build upon this recent progress. The American Brain Foundation will continue to fund and support research across the full spectrum of brain diseases with the confidence that when we cure one disease, we will cure many.

The American Brain Foundation was founded to bring researchers and donors together in the fight against brain disease. Learn more about brain disease or make a gift to support groundbreaking brain disease research.