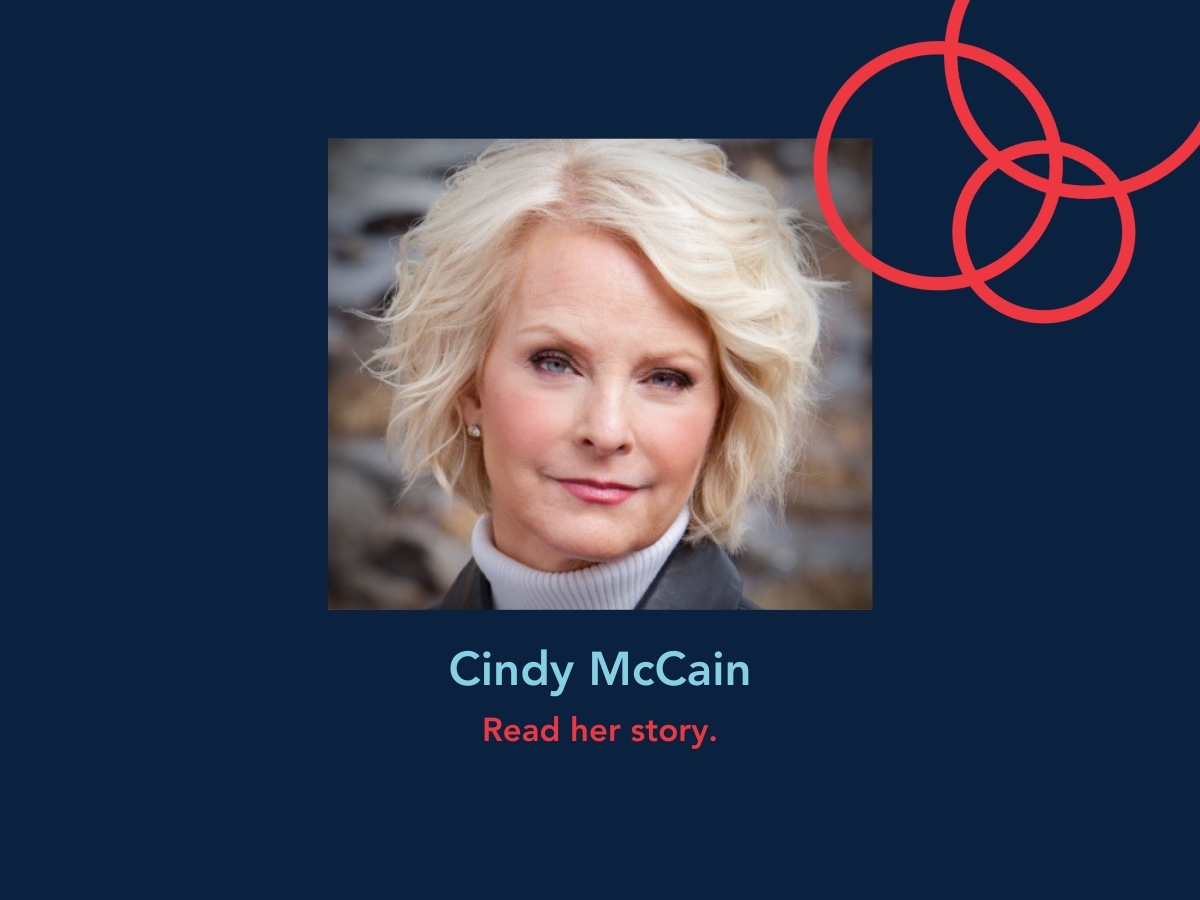 A Life with Migraine

Throughout her life, Cindy McCain has experienced migraine, a brain disease characterized by painful and debilitating headache attacks. She compares them to “having an ax in your forehead.” However, it took years of doctor visits for her to receive an accurate diagnosis. McCain has since shared her migraine story publicly to raise awareness and support research funding for a cure.

Migraine is painful and life-changing for those who experience it. But it also has a profound impact on their family members. She felt the impact of migraine on her everyday life. It could be missing her children’s music performances and public events. She would also spend days lying down in a darkened room while her husband, the late U.S. Senator John McCain, helped with the children. With migraine, she notes, there’s “no possibility of leading a normal life.”

“My husband was very kind to me about it. I am not sure he completely understood it for a long time. But he was very understanding and kind and felt terrible for me. There wasn’t much he could do except help with the kids and leave me in a dark room,” McCain relates.

Since her early doctors’ visits, migraine treatment has gone through many advances. But despite the treatment options available, there is no cure for migraine yet. In addition, the effectiveness of these treatments varies from person to person. “Those of us that suffer from migraine want a solution that is specifically designed for migraine and hasn’t been derived from some other process,” McCain says.

McCain feels optimistic about progress in the field and remains excited about current research that helps doctors better understand this disease. She hopes for a cure or a treatment option that specifically targets migraine and allows those who experience it to continue living their lives without pain. “I became involved in the community in general just to help facilitate a cure that could relieve all of us that get the same kinds of migraine headaches,” McCain says.

Cindy McCain’s life changed forever when her husband received a diagnosis of glioblastoma. It’s a malignant tumor that can grow in the brain and spinal cord, and another brain disease without a cure. Before his diagnosis, she had never heard the word glioblastoma, though she had heard of brain cancer in general terms. The diagnosis opened up a whole new world for her family. “It was almost too large to grasp,” McCain says, “that something that small could be that devastating to one’s body.”

Glioblastoma is a common and aggressive form of brain cancer that is too often fatal. That’s even with treatments such as radiation, chemotherapy, and surgery available. Glioblastoma presents a challenge to doctors. “Like most cancers, you are never quite sure you got it all, and in the case of glio, it comes back with a vengeance,” McCain explains. As with many cancers, there is no real cure, and in addition, there aren’t many effective treatment options. She describes glioblastoma as “a cunning monster.”

The battle against glioblastoma is also difficult for family members. They suffer both as caregivers for their loved ones and as witnesses to the cancer’s impact. “When you watch someone like my husband, who had been so vibrant, so incredibly engaged and lively, this charismatic man who was speaking many times for the world when he was in the Senate, to watch him be ravaged by the disease, it’s difficult and heartbreaking.” Since her husband’s diagnosis, McCain has heard from survivors and from others who have lost loved ones and remarks, “It’s never easy, for anyone.”

The Importance of Brain Disease Research

The loss of her husband to brain disease made Cindy McCain dig in her heels and say, “Enough.” She became an advocate to support glioblastoma research. “We have to be more engaged with funding for research to stop this,” she explains.

Cindy McCain joined the American Brain Foundation board of directors in January 2020 to help raise awareness about brain diseases and disorders and increase research funding in search of cures. “Brain disease is tragic in every way, shape, or form because for obvious reasons, it affects everything you do,” she says. It affects those afflicted as well as the countless others whose lives they touch.

Funding brain disease research helps doctors and scientists uncover the links between different diseases, from migraine and glioblastoma to other brain diseases like Parkinson’s disease and multiple sclerosis. They use this knowledge to discover new learnings they can then apply to others as well. These discoveries support prevention, early diagnoses, improved treatment, and ultimately cures, giving hope to the millions affected by brain disease.

Despite her loss, McCain’s work with the American Brain Foundation gives her hope for a future without brain disease. “I can’t begin to tell you how it gives me hope. I hear all the things that are going on, and I hear the thought processes and where to take this and what could happen and what is happening. It’s hard for me to not stand up and dance around the room,” she remarks.

The American Brain Foundation works to unite donors and researchers in the fight against brain disease by funding research across the whole brain. McCain notes, “What they are doing not only gives hope, but also lets me know that someone has our backs.”

“I encourage everybody to get involved and support the American Brain Foundation, or any brain-related foundation, to help us move forward and find cures to these horrible diseases,” says McCain.

The American Brain Foundation was founded to bring researchers and donors together in the fight against brain disease. Learn more about migraine, glioblastoma, and other brain diseases or help us in our mission by giving today.