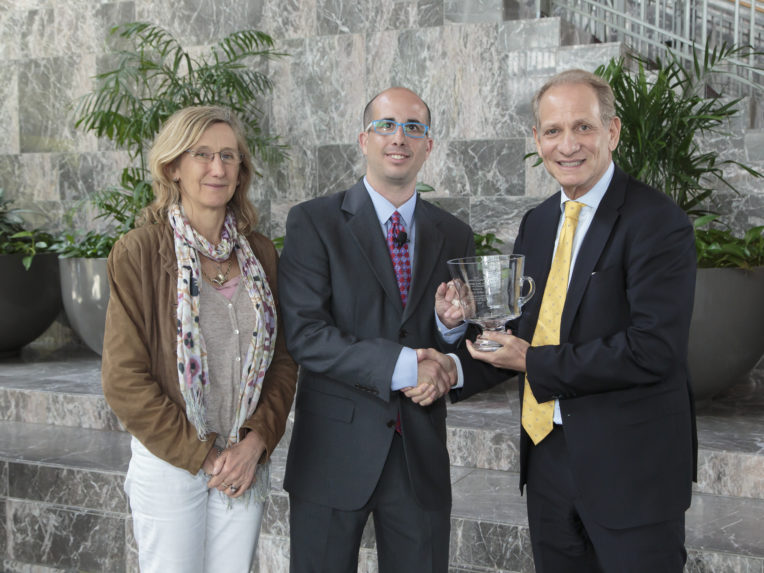 MINNEAPOLIS – The American Academy of Neurology, The ALS Association and the American Brain Foundation are awarding the 2019 Sheila Essey Award to Aaron Gitler, PhD, of the Stanford University School of Medicine. The award recognizes significant research contributions in the search for the causes, prevention and cure for amyotrophic lateral sclerosis (ALS), also known as Lou Gehrig’s disease. The $50,000 prize is given to support continuing ALS research. Gitler will be honored at the American Academy of Neurology’s 71st Annual Meeting at the Pennsylvania Convention Center in Philadelphia, May 4-10, 2019.

Gitler will be recognized during the Essey Award Panel Presentation held on Tuesday, May 7, at 3:30 p.m. Past winners of the award will also be present and give updates on their research.

Gitler is receiving the award for his research on a protein called TDP-43. Clumping of this protein is thought to play a major role in ALS. Gitler and his team investigated what happens to a cell when TDP-43 forms clumps in baker’s yeast cells. They found a gene in the yeast cells that could protect the cells from the clumping protein. The related gene in humans is called ataxin-2. They also found that people with ALS have a higher frequency of ataxin-2 mutations. The mutations appeared to make TDP-43 more prone to clumping.

Gitler hopes his research will eventually benefit people with ALS. He explained that a new class of gene therapy drugs called antisense oligonucleotides are helping people with other neurodegenerative diseases, including spinal muscular atrophy. His research on ataxin-2 suggests that a similar approach to target ataxin-2 could be effective in ALS.

“I am very grateful to receive this award,” said Gitler. “In looking at the list of previous Sheila Essey Award recipients, they are all my scientific heroes and role models. It is very humbling to have the opportunity to make a small contribution to ALS research.”

The Sheila Essey Award for ALS Research is given to acknowledge and honor individuals who are making significant contributions in the search for effective treatments and cures for ALS. Since 1996, the $50,000 award has been made possible through the generosity of the Essey Family Fund through The ALS Association Golden West Chapter, in memory of Sheila Essey, who battled ALS for 10 years and died from the disease in 2004.

Richard Essey, Sheila’s husband, served as a National Trustee of The ALS Association and is one of the founders of the Greater Bay Area Chapter, now the Golden West Chapter. Past recipients have used the funds to continue ALS research or to support promising young scientists on their research teams.

Learn more about ALS at BrainandLife.org, home of the American Academy of Neurology’s free patient and caregiver magazine focused on the intersection of neurologic disease and brain health. Follow Brain & Life® on Facebook, Twitter and Instagram.