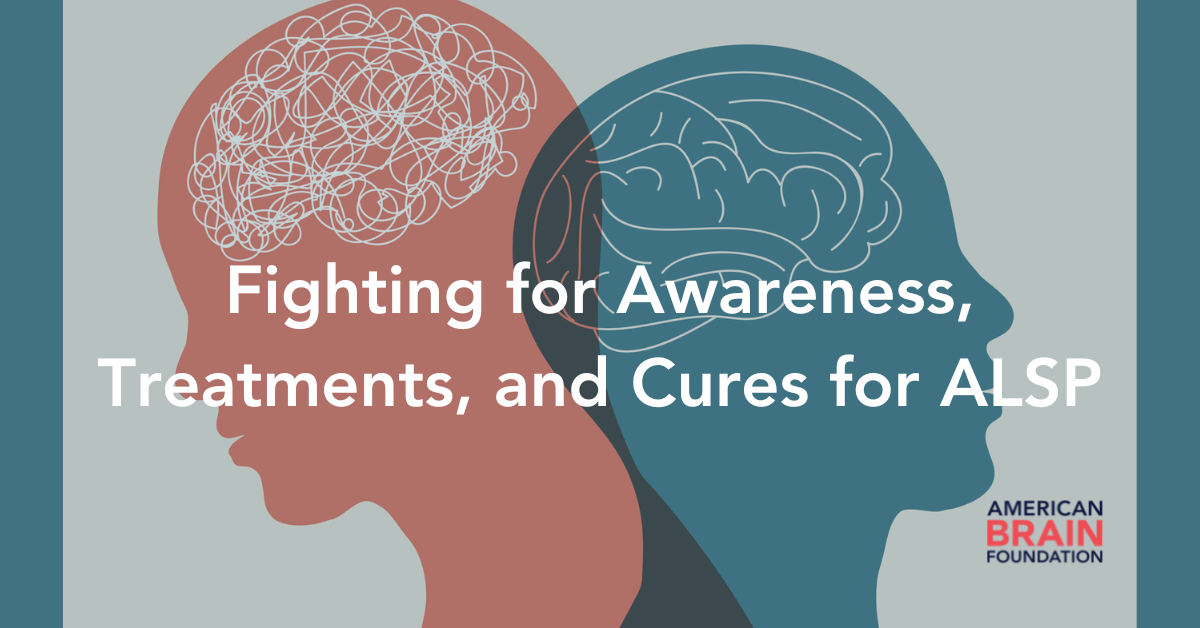 Fighting for Awareness, Treatments, and Cures for ALSP: A Family’s Journey With a Rare Brain Disease

Learn about Jeffrey Cade’s journey with ALSP, as well as how his sister Kim and other family members are working to support research into treatments and cures for everyone impacted by this rare brain disease.

Jeffrey Cade had just stepped into a new position overseeing a 2,000-student youth soccer organization when he started experiencing dizziness and movement issues in 2018. These initially mild symptoms would eventually lead him to be diagnosed with a rare progressive brain disease called adult-onset leukoencephalopathy with axonal spheroids and pigmented glia (ALSP). Over the course of the next several years, Jeffrey’s symptoms would quickly worsen, forcing him to move back home with his mother as he and his family struggled to receive an accurate diagnosis.

For the long-time youth soccer coach, the sudden and rapid progression of the disease was devastating. “His life was changed overnight,” says his sister Kim. “He went from athlete and coach to basically disabled due to a brain disorder.” After living for two years with a misdiagnosis of multiple sclerosis (MS), Jeffrey and his family finally got an official diagnosis of (ALSP).

ALSP is a rare, progressive brain disease caused by a mutation of the CSF1R gene. Symptoms include difficulty with speech and movement as well as behavioral changes, often accompanied by issues like depression, anxiety, and cognitive decline. Over time, ALSP results in a complete loss of speech and motor functions and is ultimately fatal. There are currently no cures or clinically approved treatments.

Through it all, Kim says Jeffrey has remained hopeful, as much of an inspiration to his family and friends as he was to the players of the soccer organizations in which he was an active and involved member. “Jeffrey is hilarious, he is kind, he is so generous and giving. Anybody who meets Jeffrey walks away with a smile on their face,” says Kim. “The fact that he remains so positive speaks volumes.”

Read Jeffrey’s full story and learn about his and his family’s journey with ALSP below.

Early Symptoms and Misdiagnosis With MS

In February 2019, when Jeffrey was 42, he drove himself to the nearest hospital. Earlier in the previous year he had fallen while coaching and had started experiencing some dizzy spells. Now, he was stuttering, struggling to get the right words out, and what speech he could manage was slurred. The doctors ran tests and assumed he had suffered a stroke.

Over the course of the next year, both his speech and his ability to walk worsened, and in the summer of 2020, Jeffrey moved in with his mother so she could act as his caretaker. By this point he was using a walker and had been diagnosed with multiple sclerosis (MS), but the diagnosis had done nothing to help with improving or managing his symptoms. It would be nearly another year before Jeffrey and his family received the correct diagnosis of ALSP.

Jeffrey’s case is unfortunately not unique, and ALSP is often initially misdiagnosed as MS. Early symptoms like difficulty speaking, movement issues, and cognitive impairment can progress quickly and overlap closely with those of other brain diseases like MS, Parkinson’s, and ALS. For this reason, only genetic testing can conclusively yield an ALSP diagnosis—often after a person has struggled with a misdiagnosis and ineffective treatments for months or years.

Getting an Accurate Diagnosis and the Role of Genetic Testing

In late 2020, Jeffrey’s doctors began running additional tests, and by January 2021 they had discovered the CSF1R gene mutation indicative of ALSP.

“When we finally got the diagnosis of ALSP and understood that we were dealing with a terminal illness, it broke our family,” says Kim. “We wanted to do everything in our power to help him, but we didn’t know where to start. There was very little information on ALSP.”

Getting an official diagnosis set Kim on a path to learn more about the disease and find ways she and her family could support Jeffrey through the days and years ahead. She began to find resources and support networks—including the Sisters’ Hope Foundation and the American Brain Foundation—that helped provide answers about ALSP and offered ways family members could get involved in efforts to find treatments and cures.

One of these opportunities came through discussions with Jeffrey’s medical team. “Our family tried to find ways that we could help Jeffrey, and it was then that the doctors asked me, my brother Joseph, and my mom to get tested for the gene mutation,” says Kim. “My mom tested negative, my brother Joseph and I tested positive.”

For Jeffrey, the loss of mobility and independence caused by ALSP’s rapid progression was a shock. For years he had been an active soccer player and coach involved in his community and helping others. Jeffrey started playing soccer when he was just 5 years old, and he used to tell his mother that when he got older, he was going to be a soccer player. For a while he did play semi-pro soccer, until a passion for teaching others led him into coaching. In addition to coaching a women’s soccer team in Reno, Nevada, he also spearheaded a youth soccer organization with approximately 300 students and coaches. He had just been promoted and asked to oversee a much larger organization serving 2,000 student athletes based in California when his ALSP symptoms began.

“Jeffrey was always independent and active, looking forward to sports, especially soccer,” says Kim. “Today, he requires 24/7 care. He needs help getting out of bed and with basic tasks such as bathing.” While his mother was able to act as his primary caretaker during the early stages of the disease, he now lives in a nursing rehabilitation facility where he can receive around-the-clock care and support.

Because ALSP can cause behavioral changes, Jeffrey sometimes receives medication to help control symptoms like extreme anger and anxiety or depression. Kim says that though he struggles to speak and cannot walk, Jeffrey stays positive and looks to the future. She recalls asking him one day how he was feeling. “He responded, ‘I have great days, and I have OK days, but I never, ever have bad days,’” she says. “And that speaks volumes to who Jeffrey is.”

A Bone Marrow Transplant and the Hope of Future Treatments

There are currently no FDA-approved medications to treat ALSP. Certain medications may be used “off label” to treat specific physical or psychological symptoms, but these do not halt or slow the progression of the disease.

In April 2021, one of Jeffrey’s doctors at the University of California, San Francisco Medical Center recommended a bone marrow transplant. While the procedure is currently considered experimental as a treatment for ALSP, doctors advised that it may be able to halt the progression of the disease by providing the body with an infusion of healthy stem cells. While the family was working to find a suitable donor for Jeffrey, they got word that the insurance company would not approve the transplant because it was not considered an established treatment.

Thankfully, over time and with help from doctors at the Mayo Clinic, they managed to get the procedure approved by Jeffrey’s insurance company. However, it was a struggle which for Kim underscored the importance of increasing awareness about and research into approved treatments for ALSP. Not only is the lack of recognized treatments an issue for people living with the disease, but the lack of knowledge and awareness among the medical community makes it harder to get a diagnosis. Kim recalls that her own doctor wasn’t familiar with ALSP when she went in for an appointment following Jeffrey’s diagnosis.

By late November, Jeffrey’s cousin Kai began the process of becoming a bone marrow donor—an already complex process made even more so by the ongoing COVID pandemic. In March of this year, Jeffrey underwent a bone marrow transplant. The full transplant process took six weeks, including a round of chemotherapy before the transplant and hospitalization to monitor his status afterward.

While this is far from a much-needed cure for ALSP, Kim says the family hopes it will enable Jeffrey to continue battling the disease long enough to benefit from treatments developed in the future. For now, Jeffrey is recovering well from the bone marrow transplant. “He is getting stronger, he’s doing physical therapy, and he is determined to take steps and use a walker again,” says Kim. “He’s a fighter, he’s positive, and we are so proud of him.”

The Importance of Research and Awareness in Finding a Cure

Testing positive for the CSF1R gene mutation alerted Kim not only to her own risk of developing the disease, but also to the importance of awareness in the future of ALSP research and treatment. “Knowing that I have the gene mutation has changed my life. I think about it every day, and I wonder if I too will develop symptoms,” she says. “But in understanding this disease, I have the opportunity to be able to take action [should symptoms start to develop].”

In the future, the ability to identify one’s own risk for ALSP through genetic testing may also open up possibilities for treatments and procedures, like bone marrow transplants, that could slow or even halt disease progression early on. “Two years went by where Jeffrey had a misdiagnosis,” she says. “If people and physicians understood this disease and brain disorders better, he would be in a better position than he is today.”

Today Kim is working to help support other families dealing with ALSP and is also participating in a clinical trial at UCSF involving people with the CSF1R gene mutation. She remains hopeful that researchers will develop effective treatments for ALSP in the near future. “Research is important,” she says. “The more people we get involved who have the CSF1R gene mutation or have ALSP, the better chances we have to find treatments and eventually a cure.”

Jeffrey hopes that by sharing his story he can help put a face to ALSP and expand awareness for all people living with brain diseases and disorders. “Jeffrey would first and foremost want to tell you that he’s okay,” says Kim. “But he would also ask you for help—help for others living with ALSP and other brain disorders. He would want you to spread the word so we can find the best treatments and one day a cure, and see the first survivor of ALSP.”

The American Brain Foundation is committed to finding treatments and cures for all brain diseases and disorders. By donating today you can help us achieve a future without brain disease.