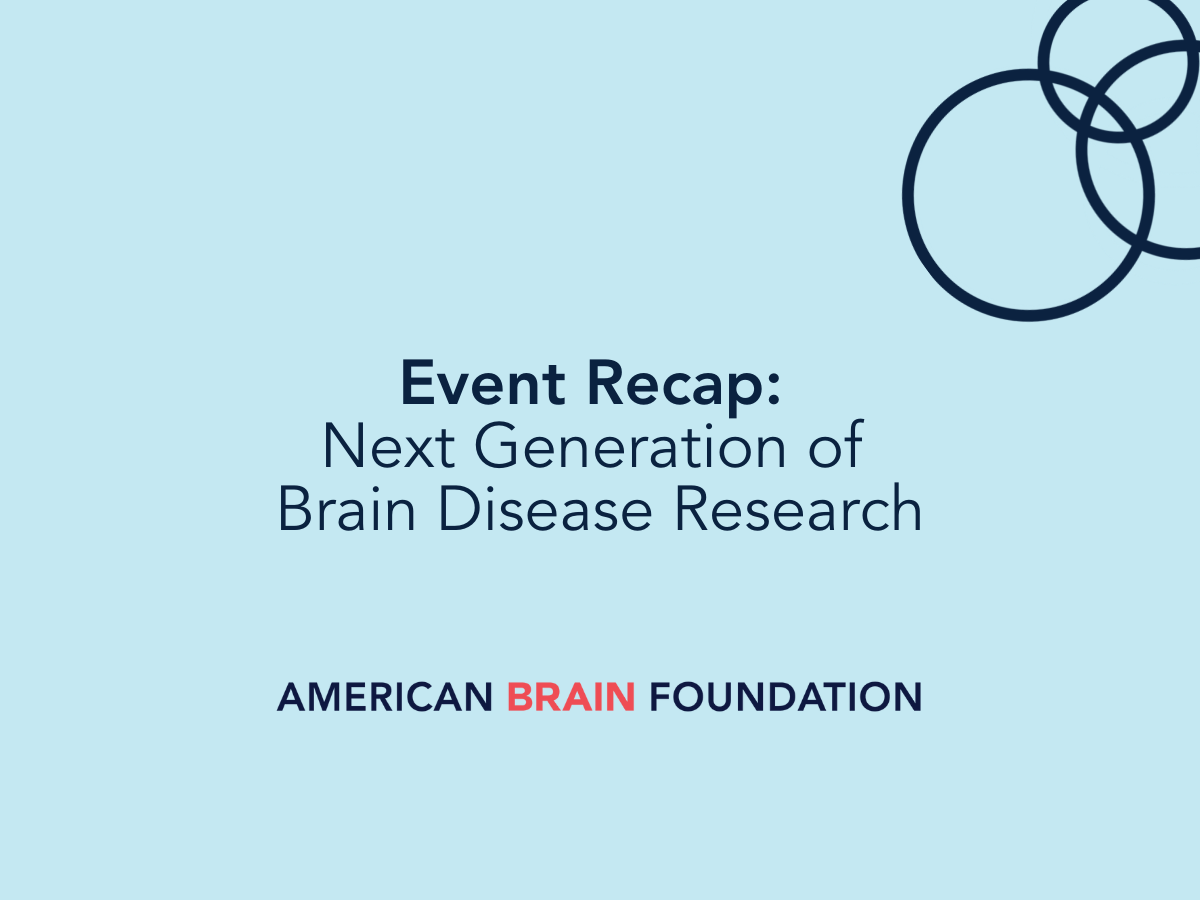 On Sept. 21, 2021, David Dodick, MD, FAAN, hosted the American Brain Foundation’s Next Generation of Brain Disease Research event: Meet the Researchers Working to Find the Cures of Tomorrow. During the event, we heard from a few recipients of our Next Generation Research Grants. We also learned about their research projects and what they hope to achieve. The event also had a live Q&A where viewers could ask the researchers questions about their work and about brain disease.

Read more about these research projects and watch the event recording below.

About Next Generation Research Grants

Through the Next Generation Research Grants, the American Brain Foundation funds and supports investigations by promising early-career clinician-scientists. Over the years, the program has provided a total of over 33 million dollars to more than 270 researchers. Of these, 86 percent have gone on to secure additional funding from the NIH and other funders to advance careers. These grants are helping fund research across the whole brain. We feel this is the best hope for finding better treatments, preventions, and cures for the brain diseases and disorders affecting 1 in 6 people worldwide.

Amyotrophic lateral sclerosis (ALS) is a progressive neuromuscular disease that attacks the nerve cells responsible for voluntary movement. Dr. Brent’s research focuses on the mutations in KIF5A, a type of motor protein, that have been identified in individuals with ALS. Dr. Brent will study how these motor proteins function in neurons. He will also look at how and why mutations in these proteins may cause ALS. His research has the potential to impact how ALS is identified and treated. This could eventually lead to improved treatments and quality of life for people with this incurable disease.

“My hope is through the research that I’m pursuing now that we can lay the foundation for understanding how transport throughout different parts of neurons goes awry in the disease and how we can fix it,” says Dr. Brent.

Multiple sclerosis (MS) is an autoimmune and inflammatory disease that affects the brain and spinal cord. It involves unpredictable and disabling attacks. Dr. Gill’s research aims to identify new therapeutic targets for progressive forms of MS. Through mouse models, he will look at a specific protein called NLRX1 that can affect inflammation in the brain. He will also study the role this inflammation in the cells has in triggering and promoting disease progression in MS.

Facioscapulohumeral muscular dystrophy (FSHD) is a debilitating and painful genetic disease that causes progressive muscle weakness of the face, arms, legs, and around the shoulders and chest. Dr. Knox’s research project builds on prior research in muscular dystrophy and examines a specific protein called DUX-4 as a potential cause of FSHD. This protein, when expressed incorrectly, is toxic to muscles. Her research will also examine gene therapy to potentially block the protein from being released.

“We are, as a field, developing therapies to suppress [the DUX-4] protein, but we do need to understand more about how it’s functioning to develop these types of innovative therapies that can actually modify, improve, and potentially cure the disease,” says Dr. Knox.

Researchers have learned that ALS patients use lipid oxidation as a fuel to generate energy more so than healthy individuals. In individuals with ALS, this change in the way the body breaks up lipids seems to start years before the first signs appear. Through his research, Dr. Lee seeks to identify indicators in the body’s metabolism that may predict which individuals will develop ALS. Hopefully, this will help us better understand why the disease progresses more quickly in some patients.

“I aim to study lipid changes in patients with ALS and also asymptomatic gene carriers by using a novel technique called the lipidomics… and this might help diagnose the disease earlier and also might lead to the development of new treatments,” says Dr. Lee.

Typically, healthy cells have a process to degrade and recycle cellular waste. But in people with ALS and other neurodegenerative diseases like Alzheimer’s and Parkinson’s, unneeded abnormal proteins accumulate in the cells. Researchers still don’t understand why these proteins are accumulated and why the cells are not able to clear them out.  Dr. Sampognaro’s research will help to clarify this disease mechanism of ALS and identify new therapeutic targets for treatment.

“My work is investigating these really tiny pockets within cells, called lysosomes. Trying to figure out what’s going on under the hood to see if there’s not a drug target or an enzyme that we can identify that is capable of clearing out these proteins, and perhaps try to enhance their effect in the hopes of one day mitigating and… curing this disease,” says Dr. Sampognaro.

Epilepsy is a serious chronic neurological disorder characterized by recurrent seizures, which can be disabling. For most patients, medications can help control seizures. After a period of seizure control, over half of epilepsy patients can be seizure-free without medication. However, these drugs may also have downsides, including cost, side effects, and interactions with other medications. Dr. Terman will analyze trials to study the effect of stopping anti-seizure medications on the risk for relapse and create an individualized risk calculator. He hopes this will help people with epilepsy and physicians estimate the risks and benefits of continuing or stopping these medications.

“While choosing who to start treatment can be challenging, who to stop treatment can be even more challenging. My work focuses on one of the key ingredients in making a good decision, which is understanding the probability that a patient would have another seizure if they continued versus if they stopped,” says Dr. Terman.

Cardiovascular disorders like stroke can cause permanent damage and require immediate medical care to increase patient outcomes. But cognitive age may also affect these outcomes. Dr. Waziry’s research focuses on developing biological age measurements through a routine blood test. He studies this factor in order to determine whether biological age can predict cognitive outcomes for stroke survivors. She believes it’s important to understand how aging biology relates to stroke and vascular dementia. Her project also aims to help researchers learn more about racial disparities in stroke risk and outcomes.

“I’m studying those aging metrics in people with stroke and I’m comparing them to healthy individuals to really try and identify a time window at which we can intervene for primary prevention and achieve this ultimate goal of aging free of stroke and cognitive impairment and vascular dementia,” says Dr. Waziry.

Vascular disease, which affects the body’s blood vessels, and Alzheimer’s disease, which causes a progressive decline in memory, thinking, and ability to do daily tasks, are the two most common changes affecting memory and cognitive ability as individuals age. Dr. Yau will study a group of older individuals who were cognitively normal at the start of the study. She will follow them as they age to determine their cardiovascular risk. The doctor will also see how their brains change over time. She will study whether brain changes that are indicators of Alzheimer’s disease, such as white matter health and accumulation of tau and amyloid proteins, affect their cognition. By discovering measurable diagnostic tests, she hopes to discover connections between early vascular risk and white matter injury. She believes finding this will slow the rate of cognitive decline and promote healthier brain aging.

“I hope to better understand at an early stage where people have no cognitive symptoms, how vascular risk and also risk disease pathology interact with each other and what brain changes are responsible for them working together versus separately to bring about cognitive decline,” says Dr. Yau.

The live webinar concluded with a chance for researchers to answer questions and explain why they believe in the American Brain Foundation’s “Cure One, Cure Many” approach. Check out the full video for more from our 2021 class of Next Generation Research Grant recipients.

The American Brain Foundation relies on the support of donors and sponsors in order to fund these grants. Dr. Dodick says, “Many of these research projects are focused on disease areas where there is no treatment, there is no cure, and so this is desperately needed. Every dollar toward research counts, and only with the help of sponsors and supporters can we continue to fund this kind of research and make a life with no brain disease a reality.”

Donate to support more researchers like our NGRG recipients as they search for cures for brain disease.